SAS (+1.3%) was among the few gainers, as the majority of European airline shares declined on Monday (29-Nov-2010). SAS stated last week it is evaluating the acquisition of Bombardier CS300 aircraft as the carrier prepares to add approximately 55 aircraft to its fleet over six years.

The carrier plans to phase out 37 older B737s and Boeing MD-80s over the next several years while adding capacity to meet anticipated annual passenger growth of 4% to 6% through 2016.

British Airways (-3.9%) and Iberia (-2.9%) were among the biggest decliners, despite their shareholders voting in favour of the merger between the British and Spanish national carriers. Shares of the new International Airline Group (IAG) holding company will be listed for trading on stock exchanges in late Jan-2011. IAG is registered as a Spanish company with tax domicile in Madrid, where its board of directors and general shareholders meetings will be held. Its financial and operational headquarters will be located in London.

Pushing BA down, cabin crew union Unite confirmed a fresh ballot for industrial action is planned. Unite expects to serve notice of an industrial action ballot to the airline shortly. The ballot should be concluded in early Jan-2011.

Turkish Airlines (-5.3%) and Meridiana Fly (Eurofly) (-5.1%) were also down for the day. Turkish was down as the Istanbul Stock Exchange declined 3.1% for the day on European debt concerns.

In other market news, flybe announced its IPO plans have been postponed due to the uncertain financial climate in Europe. The board had planned a GBP200 million IPO for this month but market volatility in the region will delay the float. The regional airline had planned to sell a 25% stake to the public. Advisers Bank of America Merrill Lynch and Investec are acting as advisors. 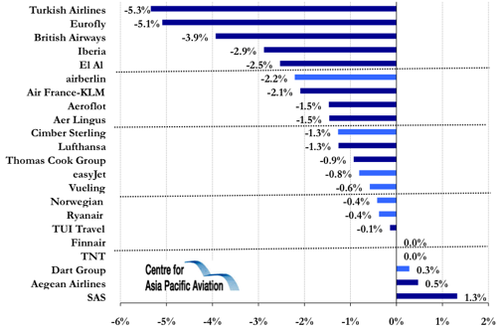