Good news emerged for Bombardier late last week, with SAS confirming it is considering an order for CSeries aircraft to replace B737s and MD80s. SAS needs 55 aircraft over the next six years, as it revamps its regional fleet and looks to increase capacity at 4-6% p/a until 2016.

The news is a tonic for Bombardier, which recently faced another round of criticism from Qatar Airways CEO, Akbar Al Baker. The Doha-based carrier confirmed it is still interested in the aircraft, potentially 30 of them, but “commercially sensitive issues” have stalled talks since last year. Mr Al Baker commented that Bombardier has not resolved the issues and could potentially lose out to the A320 NEO, which Qatar Airways hopes to be a launch customer for. Another Gulf region carrier Gulf Airways, is considering the CSeries, along with the A318 and the Embraer E-jet family, for its new regional aircraft fleet.

Bombardier shares declined 1.6% on Friday, while shares in Embraer fell 1.6%. EADS, parent of Airbus, were down just 0.2%, while Boeing shares dropped 0.9%.

Share’s in Russia’s United Aircraft Corporation jumped 5% on Friday. The state-owned umbrella company, which has both civil and military construction under its control, stated last week that it hopes to increase its production and foreign sales of commercial and military aircraft. UAC and Antonov of the Ukraine have been pressing forward with a plan to enter into a full cooperation agreement covering aerospace production. Both UAC and Antonov have new commercial aircraft entering early serial production. 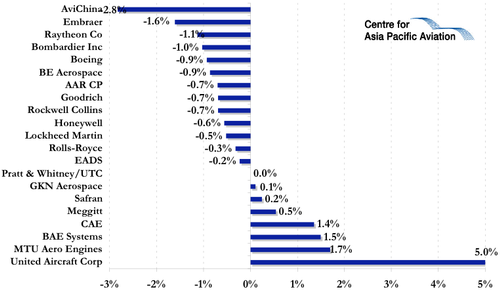 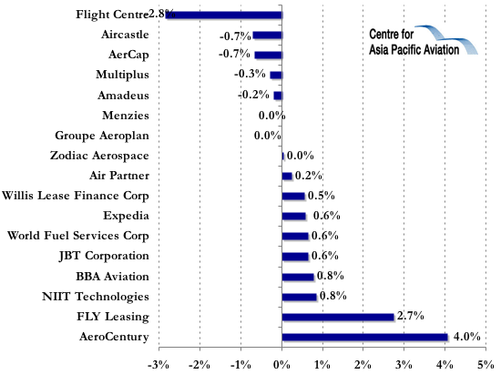