SAS Group has a weak 1Q2014 as predicted, in spite of cost cuts. Is it time for capacity cuts?

When it announced a return to profit for FY2013 in Dec-2013, SAS warned that 1QFY2014 would be “extremely weak”. Its prediction has proved correct. The SAS Group’s 1Q pre-tax loss (before non-recurring items) widened by 57%. It continued to make good progress with its 4Excellence Next Generation (4XNG) cost reduction plan, but highly competitive market conditions weighed heavily on unit revenues.

SAS President and CEO Rickard Gustafson commented that the quarter was “marked by overcapacity and lower growth, which put pressure on margins across the entire market.” In this respect, SAS may be contributing to its own problems as it plans faster growth than the market this summer.

Its cost cutting and product improvement credentials are strengthening with each passing quarter, but its capacity growth is clearly not being absorbed profitably by the market. 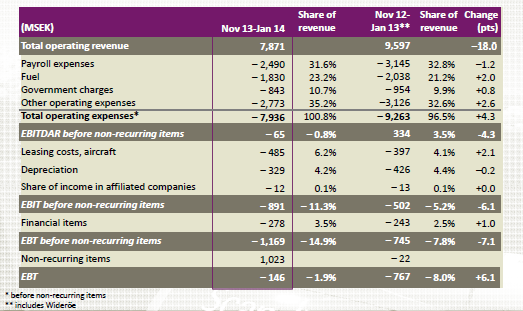 One of SAS’ key balance sheet targets is its ‘financial preparedness’, a measure of overall liquidity as a percentage of fixed costs. The group’s minimum target for this ratio is 20% and it exactly met this level at the end of Jan-2014. Its cash and cash equivalents stood at SEK3,343 million (EUR378 million), almost double the balance of a year earlier.

In Feb-2014, SAS issued SEK3.5 billion (around EUR400 million) of preference shares, which raised its financial preparedness to 43%. After taking account of the payment of preference share dividends and the repayment of bonds due in Jun-2014 and convertible bonds in Jun-2015, its proforma financial preparedness is effectively 25%. This gives it a cushion over its minimum target. 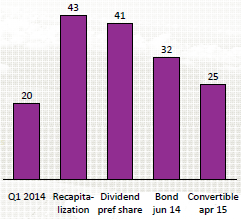 SAS increased its scheduled ASK capacity by 3.4% year on year in 1QFY2014, but RPK growth was only 0.7% and load factor slipped by 1.8ppts to 66.3%. Although the quarter always sees seasonally weak demand for most European carriers compared with the summer months, the Association of European Airlines reported load factors of 76% to 78% for this period, highlighting the weakness of SAS’ performance in this respect.

On a 12 month basis, SAS achieves load factors that are around 6 ppts below the AEA average, but its winter loads are more than 10 ppts off the pace.

In addition to weak load factor, SAS saw a 5.6% fall in currency adjusted yield per RPK, so that currency adjusted passenger revenue per ASK tumbled by 8.1%. This unit revenue decline reflects competitive pressures in SAS’ markets and suggests that its capacity growth may have been too rapid.

Some of the ASK growth is the result of larger aircraft, reflecting the upgrade of the fleet. In addition, SAS is keen to preserve its network integrity for its frequent flyers and to maintain its positioning on important routes ahead of the stronger summer season. Nevertheless, its unit revenues have been on a downward trend for a number of years and tighter capacity growth might help to contain this.

SAS’ growth in ASKs was strongest on the intercontinental network, with an increase of 5.1%. This contributed to a small increase in average sector length (approximately 1%), which, in turn, will have contributed to a lowering of unit revenues. However, the sector length impact on unit revenues is not likely to have been great and does not explain or justify the magnitude of the drop.

SAS Group revenues were down 18%

Group revenues fell by 18% to SEK7,871 million (EUR885 million), with scheduled passenger revenues down 18%, although this performance was significantly affected by the sale of former subsidiary Widerøe.

Stripping out the effect of Widerøe and currency movements, the underlying fall in traffic revenues was still almost 7%, as capacity growth was more than offset by falling yield and load factor, as noted above. 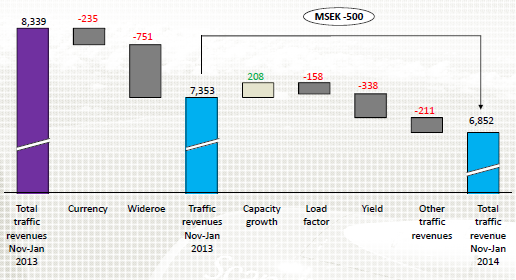 The group’s operating costs (excluding non-recurring items) fell by 13%, in spite of the increase in ASKs, but this was less than the drop in revenues. Fuel costs fell by 10%, due to the Widerøe disposal and hedging/price effects.

Ex fuel costs fell at the faster rate of 14%, significantly helped by a 21% drop in labour costs (excluding a one-off positive item of SEK1,044 million (EUR117 million), arising from changed pension terms). This cut in labour costs was greater than the 14% fall in average group headcount and reflects progress with the group’s 4XNG restructuring programme.

SAS says that 4XNG contributed SEK380 million of cost reductions in 1QFY2014 and expects a contribution of SEK1.2 billion over the full year. Currency adjusted unit cost for SAS airline was down by 3.9%, or by 3.2% excluding fuel, in 1Q. This maintains a multi-year record of unit cost reduction. 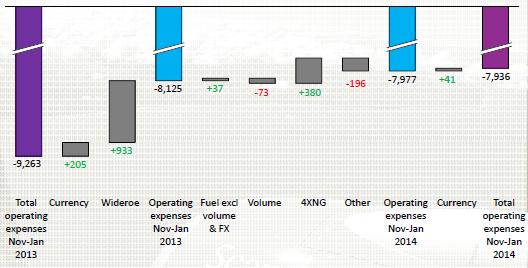 SAS will grow seat capacity this summer by around 4%, opening 44 new destinations. This compares with expected growth in the overall market to/from and within Scandinavia of 1.8%, according to data quoted by SAS and sourced to Innovata.

According to the same source, seat growth by key competitors in the Scandinavian market will be as follows: Norwegian +6%, Air France-KLM +3%, Ryanair -30%. 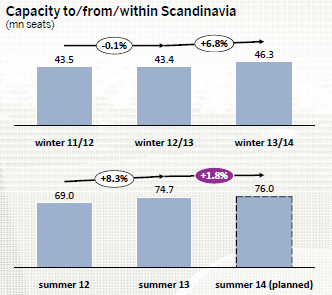 In terms of the earnings outlook into FY2014, SAS remains cagey, saying only that it expects continued yield pressure and a positive pre-tax profit (excluding the positive impact of pension changes), “provided that market conditions, in terms of capacity, jet fuel and exchange rates, do not decline any further and that no unexpected events occur”. This outlook is unchanged from Dec-2013, when SAS announced results for FY2013, when it reported a pre-tax profit of SEK433 million.

In spite of its 4XNG restructuring programme remaining on course to deliver its target of SEK3 billion of cost savings by FY2015, SAS may not manage further growth in profits this year. Put simply, much of its hard work on unit cost reduction is being dissipated through falling unit revenues (and it still has one of the highest levels of unit cost in Europe).

Is SAS adding too much capacity?

SAS is also working hard to stimulate demand, thereby hoping to bolster its unit revenues, through product and service improvements. These include the fleet upgrade, the re-launch of its Eurobonus FFP during the northern spring, restoring its punctuality record, upgrading its on board product and developing its network.

While these initiatives are all welcome, they sound quite similar to what a number of competitors are also doing and may not be sufficient to justify a price premium.

Moreover, the biggest influence on unit revenues is likely to remain capacity discipline. SAS says that forward bookings are at the same level year on year, while it plans seat growth of 4% this summer. This overcapacity situation looks certain to lead to further declines in RASK.