San Francisco International Airport, SFO to those who use it regularly, is the primary gateway to one of the world’s most popular cities. Long famous for its appeal to tourists, the region also attracts much of the venture capital invested in the US and is on the cutting edge of high tech and bioscience, making it a prime business destination as well.

State of the art but handicapped

The newly renovated Terminal 2 is the only LEED certified airport building in the US and incorporates an extraordinary number of innovations to reduce the facility’s environmental impact.

But the airport has an Achilles’ heel in the placement of its runways. Two sets of parallel and intersecting runways that date to the 1950s are too close together to allow for parallel approaches under IFR conditions. In a region famous for its fog, this can create massive delays in inclement – or even just cloudy – weather and have given it a reputation for delays.

It was this ongoing operational handicap that made SFO one of the few airports dropped by Southwest for a period of time. In the tech boom of the 1990s, SFO saw little need for low-cost operations and was pleased when they settled instead at nearby Oakland and San Jose.

But September 11 rocked the airport, which saw traffic decline by nearly 40% in the early part of the decade, as airlines cut services and consumers increasingly patronised the cheaper options available at alternative airports.

Much like jetBlue’s exploitation of spare capacity at JFK, Virgin America chose a diminished SFO as its operational base. Additionally, Southwest returned and jetBlue operates as well, so that an airport with zero low-cost presence a decade ago now has more than a fifth of its seat offer provided by this group. 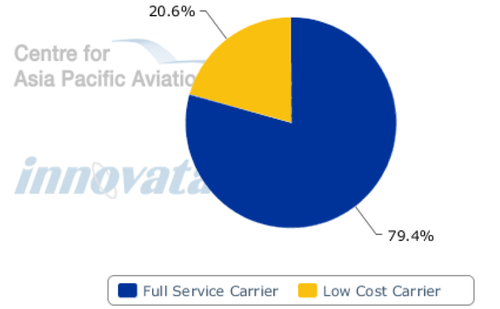 As we have seen with other US airports, despite a sizable international presence, the majority of the airport’s seats are provided in the domestic market, with much of that capacity dedicated to passengers travelling between SFO and the LA basin airports, one of the world’s most heavily travelled air corridors. 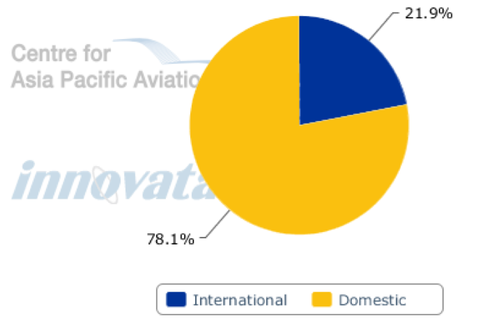 Internationally, compared to LAX, SFO holds its own to North East Asia, Europe and North America but has vastly fewer seats to other regions. To the south-west Pacific, the seat offer from LAX is approaching 65,000 per week as opposed to less than 9000 for SFO. Qantas recently left SFO and redeployed that capacity to DFW where American and oneworld are the dominant players.

A dominated but not fortress hub

Also unlike LAX, SFO has a dominant carrier in United, the airport being one of that carrier’s primary hubs. With a 40% seat share, United has a strong presence and including Continental, the percentage rises to 44%. While a respectable number, it pales in comparison to the 80-plus shares common at fortress hubs in the east and south-east. 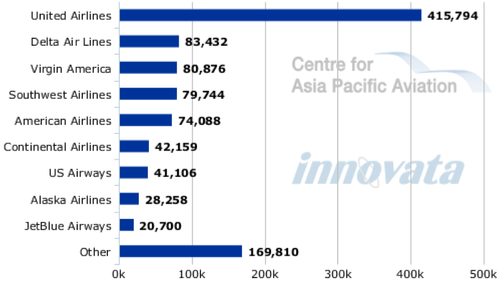 Due to the strong UA presence, as well as the appearance of both CO and US in the top provider list, the airport has a strong Star Alliance bias with that group providing more than half the seats, including a large proportion of the international lift.

Lufthansa operates an A380 from Frankfurt as well as a daily A346 from Munich. Other Star members operating at SFO include Swiss, ANA, Asiana, Air Canada, Singapore, Air China and Air New Zealand.

With the exception of Paris and Amsterdam, Star carriers compete head to head on every international route from SFO.

With the recent opening of T2, all Star domestic services will move to T3 and occupy contiguous space. A similar arrangement exists with international services where Star carriers occupy Terminal G. 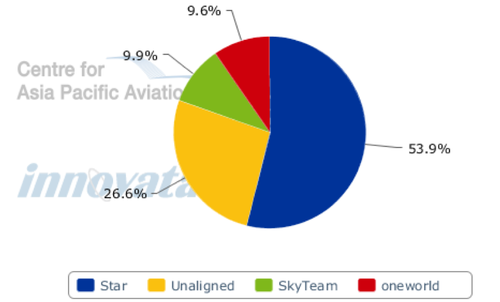 In 1991, SFO was the seventh busiest airport globally. In 1999, it had fallen to ninth position with just over 40 million passengers. In 2010, there were just under 40 million but the airport ranked 23rd, more a testament to others growing rather than to a significant loss at SFO.

The airport also benefitted from the fuel and economic problems of 2007/08, when legacy carriers drastically reduced service at Oakland and San Jose and consolidated flights at SFO.

But this build-up and increased utilisation may lead to a return of the bad old days when the runway configuration made the airport famous for delays in poor visibility. And despite numerous attempts, any new positioning of the runways has been defeated by environmental groups concerned with further degradation of San Francisco Bay.

The Metropolitan Transportation Commission, which oversees planning for the region, has decided that a more equitable distribution of flights amongst the area’s airports is the only way to ensure that congestion at SFO will not again become a deterrent to travellers.

Therefore, like its neighbour to the south, LAX, a positive long-term future is dependent on some additional traffic growth being located elsewhere in the region.

As Asian aviation ascends and plays a greater role in the global market, SFO’s long-standing ties to the region will likely maintain the airport’s global status as an important link between the US and Asia.