In our recent review of the world’s largest airports, Salt Lake City failed to make the list. As a matter of fact, it is far down that list according to the airport’s own web site, at number 62 globally and 25th in terms of US ranked airports.

A small, but dominated, hub

It did however, rate a mention in the overview of US hubs as being quite beholden to Delta, with nearly 75% of the operations and a seat share of about 73%. As shown in the chart, the carriers are few and there is no “other” category at all. 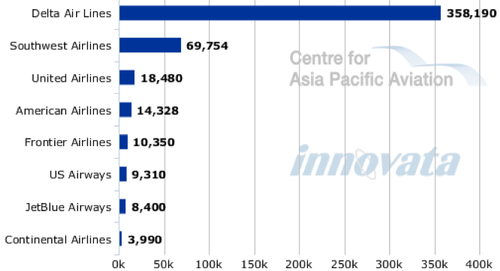 With this kind of dominance, Delta’s recent announcement that it would cut its offer by 14% in the autumn could have a significant effect on the airport as well as its short — and perhaps — long-term prospects. If we use the above number for reference, over 50,000 weekly seats will disappear and SkyWest has already announced significant layoffs (150) due to the cutback.

And doubtless SkyWest will take the brunt of the reduction. Of the nearly 90 destinations served from SLC, only 18 have only Delta mainline service and another 18 have a mix of DL and OO flights.

That leaves about 60% of the destinations with only SkyWest RJ/commuter service and those flights also account for the majority of operations in the Delta schedule. Like Cincinnati and Memphis, Salt Lake is predominantly served by small capacity aircraft.

Salt Lake City originally rose to prominence in 1982 when Western Airlines established SLC as a post-deregulation hub as it expanded eastwards. Salt Lake’s location made it an ideal collection point for traffic to/from the intermountain/southwest states. At that time Denver was still using the rather constricted facilities at Stapleton and SLC was expanded to provide a less congested alternative.

Five years later, in 1987, Delta merged with Western and incorporated SLC as a hub in its expanded network. At that time, Delta also operated a hub at DFW, where it challenged American’s dominance.

As with most US legacy carriers, the traffic declines following 9/11 resulted in operations that were both reduced and consolidated. However, by 2004 Delta was closing DFW and transferred the majority of its connecting traffic in the west to SLC, as shown by the passenger increases registered in 2005.

The boost that came to SLC in 2005 as Delta left DFW was rather short-lived and steady declines followed until 2010. But with a 14% reduction in seats pending, that stagnant trend will likely resume.

Salt Lake City--Snapshot of a Decade

Salt Lake City is the smallest metro area in the US that serves as a legacy hub. According to the recent US census, it ranks as number 50 on the metro population charts with Memphis, another DL hub, being the next smallest at 41.

This is not the first paring that has taken place at SLC. The next chart lists all the cities that have lost nonstop service from Salt Lake City since the 2005 build-up. Especially noteworthy is the drawback from Fairbanks and two points in Hawaii, indicating that perhaps that the attempt to use SLC as a collection point for these flights was not sustainable.

The city became a hub because of its location, situated roughly midway between the Canadian and Mexican borders; a real anchor in a rather sparsely populated region of the US. The city itself has grown only modestly in the past decade with most of the metro growth centered to the north around Ogden and in Provo to the south, each roughly 40 miles from SLC.

Only recently has Delta, spurred by community efforts and support, begun to fly intercontinental routes from SLC. It began service to Paris in conjunction with Air France in 2008 and started Tokyo in 2009. The Tokyo flight is seasonal and does not operate daily even in the summer. The Paris service is daily during the summer, dropping to 5X in the off-season.

Like its regional peers of Denver, Phoenix and Las Vegas, long-haul international links are few and far between—and usually vulnerable in weak markets. Only 2.3% of its seats cross a border.

So is SLC destined to be another Cincinnati, continually cut and reduced to a shadow of its former self? Probably not. But is it destined to grow in Delta’s network? Also a probable no.

Over the past decade, the traffic has fluctuated in a rather narrow band and that is likely to continue—with a gradual upward slope. There are a number of factors that lead to this conclusion.

All in all, SLC may be the right size and in the right place to ensure its stability as a Delta hub, with a limited yet important role to play in the carrier’s network.