Safran is forecasting double-digit growth in biometric security over the next five years, and is planning to boost the contribution of security to overall revenue from 10% to 20%. L-1’s products cover a wide array of specialist areas, including finger, face and iris identification used in passports, airport security and drivers’ licences.

As a part of the deal, BAE Systems will also acquire L-1's consulting division for USD296 million.

Safran is paying a 24% premium on the close of L-1 shares on Friday, a “fair price” according to Safran’s CEO, Jean-Paul Herteman. The acquisition is expected to be closed in 4Q2010.

The deal has not sated Safran’s appetite for acquisition. Mr Herteman has insisted the purchase of L-1 does not mean it has abandoned its hopes to merge with another major French supplier, Zodiac Aerospace.

Zodiac feels otherwise. Over the weekend Zodiac Aerospace announced that several of its shareholder families signed an agreement blocking any stake sales until 26-Apr-2012. The families control 26.8% of shares in Zodiac. Additional shareholders have also expressed their support for the strategy, bringing the total to total of 29.5% of shares and 40.5% voting rights.

The move is designed to “continued pursuit of the growth of the company, their commitment to its independence and their support of management,” and another direct rebuff to Safran. In Jul-2010, management at Zodiac rejected a share-swap overture from Safran, saying it would destroy value and made little sense.

Other segments performed better, with the cabin interiors business making up approximately 50% of group revenue, actually growing 3.6% year-on-year, after excluding exchange rate affects. Aerosafety and Technology reported an increase of 1.7%.

Operating margins for the year are expected to be approximately 11%, mostly due to the gradual upturn in the aircraft market and growth in aftermarket sales. Each subsequent quarter this year has seen improvement in conditions and Zodiac’s performance. All three Zodiac business units reported solid growth in the final quarter of the fiscal year, with AeroSafety and Technology up 3.4%, Aircraft Systems up 6.4% and Cabin Interiors up 11.1%.

Zodiac expects the favorable market trends confirm the progressive upturn of the aircraft cycle. The company plans to continue internal growth and making new acquisitions, with a top-line organic growth target of more than 40% over the next three years and an improvement of 2.5 to 3.0 percentage points in its operational margins. Selected acquisitions could “yield significant additional profitable growth”. 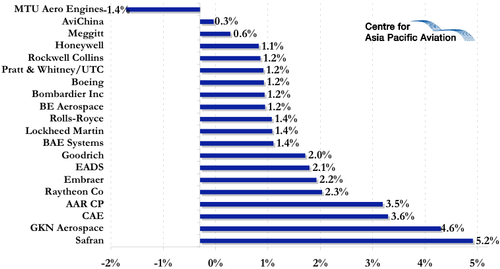 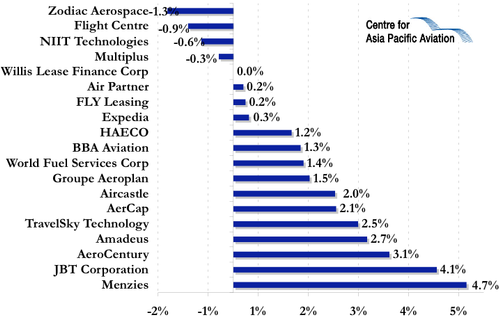