Safran Group’s headline revenue grew 1.5% in 2009, to EUR10.45 billion, which was a “strong performance… in an unsettled civil aerospace environment”, according to CEO, Jean-Paul Herteman. However, organic revenue growth actually fell 2.9%, as the company benefited from a EUR255 million currency hedging gain and a EUR206 million boost from new acquisitions and consolidation of new activities.

Safran’s aerospace and aircraft equipment units recorded revenue drops of 5.1% and 4.8%, although these were partially offset by better than forecast revenue growth in the defence and security sectors.

The company’s aerospace propulsion backlog, for the CFM56 engine, is “very satisfactory”, at more than five years of production, and Safran booked orders for 795 units, but this was down from the historic high in 2008. Service revenue increased its proportion of total propulsion revenue from 46.9% to 49.2%. Propulsion operating income was EUR594 million, a 5.7% improvement over 2008.

Aircraft equipment was slightly less affected than the propulsion segment, with operating revenue up 17.7%, to EUR73 million. Defence and Security contributed marginally to results, with full year operating incomes of EUR9 million and EUR55 million.

The outlook for 2010 is for full-year revenue to remain similar to 2009, although the Group has a “slightly less favourable” currency hedge. The assumptions underpinning the company’s outlook for 2010 include a 4-5% increase in global air traffic, a stabilisation or slight decrease in original equipment commercial aviation business and a slight growth in sales in services from 2H2010.

Jean-Paul Herteman stated Safran is confident that the company should achieve a modest increase in operating income in 2010, with the second half of the year to see airlines resume spending on services. However, 1H2010 is “likely to harbour some of the uncertainties of 2009."

World Fuel Services Corporation reported a full year net profit of USD117.1 million, up 11.5% over 2008’s result of USD105 million. The result was a record profit for the company, which posted a strong profit of USD34.5 million in 4Q2009, sending its shares up 9%.

The company managed to slash costs by nearly 42% over the year, more than offsetting a 39% decline in revenue as fuel prices dropped in late 2008 following the end of the oil price bubble.

Elsewhere in trading on Friday, Genesis Lease and AerCap continued their strong upward momentum, with strong operating results and positive news emerging on their merger late last week. EADS also had a positive day, up 4.3%, with the company reaffirming its faith in a positive outcome over the current wrangling related to the A400M programme. European nations last week confirmed their willingness to embark on a EUR3.5 billion rescue of the aircraft, already more than two years behind schedule. 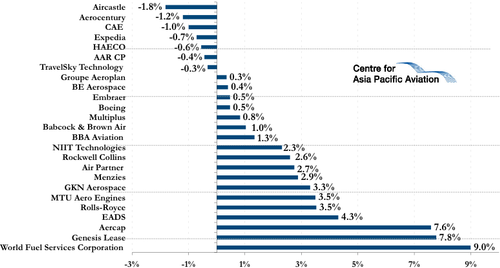