Last month’s European airspace closures is having the expected effect on April airline traffic figures. However, Ryanair’s figures, inflated by its practice of reporting booked seats as opposed to passengers flown, underscores the caution that needs to be applied when comparing airline data. It’s seldom like comparing apples with applies.

Ryanair’s “passenger numbers” surged 17% to 6.2 million last month, but the LCC disclosed that some 1.2 million passengers were affected by flight cancellations, and many of these would have flown on rearranged flights. Ryanair’s load factor rose 1 ppt to 83%, but this figure also included the passengers whose flights were cancelled.

By contrast, easyJet, which reports passengers actually carried, said the disruption caused passenger numbers to slump 7.6% in Apr-2010 to 3.5 million. The carrier was expecting to handle around 4.3 million passengers, or a 14% increase, before the six-day airspace closure. easyJet stated it received 750,000 booking cancellations as a result of the Icelandic eruption last month, of which around 200,000 were stranded by the shutdown. (easyJet will announce results for the year to 31-Mar-2010 later this week).

Another ash plume is impacting operations again this month. So expect further fantastic headline traffic growth figures again from Ryanair this month. The underlying numbers may however be quite different.

Ryanair's shares fell 1.5% on Thursday (after the traffic announcement to EUR3.50 per share) and a further 4.9% on Friday. easyJet shares fell 3% on Friday. Dart Group (parent of Jet2.com) retraced some of Thursday’s losses, gaining 0.9% on Friday. 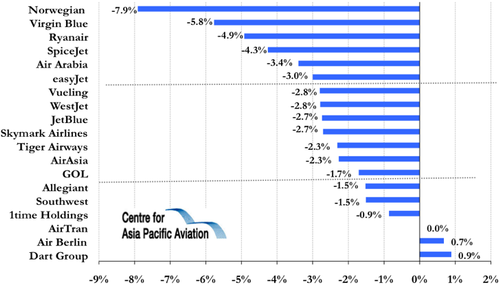