Ryanair (+0.9%) gained on Wednesday (20-Oct-2010) after CEO Michael O'Leary ruled out launching a third bid for Aer Lingus (+0.5%), but stated he would be “willing to sit down with any rival interested in buying the airline” should it want to acquire Ryanair's near 29% stake in the carrier. Despite comments made earlier in the week, Mr O'Leary dismissed suggestions Ryanair plans to increase its ownership in Aer Lingus.

British Airways (-0.5%) meanwhile declined. Cabin crew union, Unite, announced during trading that officials met with British Airways representatives to discuss a new offer which both hopes will end the dispute. The negotiations were facilitated by Acas and TUC. Staff voting on the deal is expected to commence from next week with a final result by mid-Nov-2010. British Airways stated that the revised offer "is very fair and reasonable".

Lufthansa (-0.8%) also slipped after HSBC Holdings Plc cut its rating of the carrier’s shares from ‘Overweight’ to ‘Neutral’. 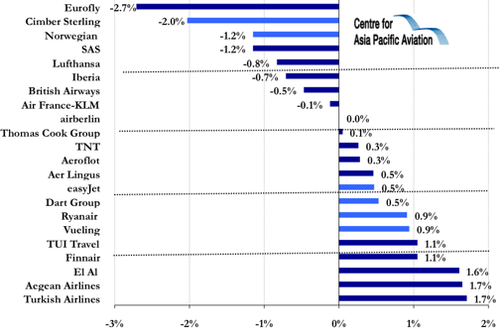