Top 30 airlines by fleet growth: Aircraft deliveries by carrier in 2009 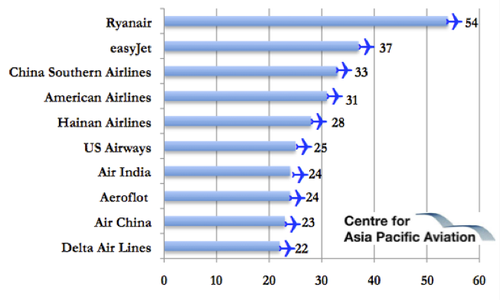 The Top 30 fastest-growing airlines by new aircraft deliveries in 2009 added 592 aircraft (regional jets, narrowbodies and widebodies) between them during the year, or 48% of total worldwide deliveries.

Ten of the Top 30 carriers were based in the Asia Pacific region, eight were in Europe, seven in North America, three in the Middle East and two in Latin America. Full service airlines accounted for 23 of the Top 30, with, surprisingly, just seven LCCs in the list.

Top 30 airlines by fleet growth: Aircraft deliveries by carrier in 2009

Ryanair to lead the way again in 2010

Ryanair is likely to top the list again in 2010, as it is scheduled to take delivery of 48 more B737s in 2010, as well as 37 in 2011 and 27 in 2012. Negotiations with Boeing for its requirements beyond 2012 recently broke down, prompting moves by Ryanair to shift its strategy. See related report: Where to next for Ryanair? Long-haul venture beckons

Ascend forecasts emerging markets to show "huge leaps in fleet growth" over the coming decade, with jet fleets in the Asia Pacific, led by China, set to escalate by 78.4%, increasing its fleet share to 27% and matching Europe’s fleet size in ten years time. European growth is 47%, driven by developing economies in Russia and central Europe.

In contrast, the North American fleet will grow by 4.7%, although it will still have the largest fleet in ten years time (a 30% share) and account for 26% of deliveries, second only to Asia/Pacific with 32%. High fleet growth will also be seen in the Middle East (71%) and the Latin America and Caribbean fleet will increase by almost 60%. Africa’s fleet will grow by just over 20%. In particular, the regional jet fleets in emerging markets show exponential growth over the next 10 years, with a hike of 176.5% in Asia Pacific; 125.3% in the Middle East and 100% in Latin America and the Caribbean.

According to Ascend, “China and India are leading the way”, adding, “over the next decade Brazil and Russia are also expected to grow significant fleets”.