Ryanair's agreement to buy 100 Boeing 737MAX aircraft, plus a further 100 options, for delivery between 2019 and 2024 allows it to accelerate its traffic growth modestly. After four years of growing passenger numbers in the region of 3% to 5% annually, it looks set to step this up to 6% pa from FY2016 (year to March).

The greater fuel efficiency of the MAX and a higher number of seats (197, eight more than on its 737-800s) will give Ryanair significant operating cost per seat savings. Its negotiating power is likely to have secured favourable terms with Boeing and this should also give Ryanair an advantage over competitors in ownership cost per seat.

The recent evolution of its product and service add new elements to the basis of competition. However, low fares (based on low costs) will remain its key competitive advantage. In this report, we consider Ryanair's main strengths, weaknesses, opportunities and threats.

Ryanair has the lowest unit costs of any European airline and one of the lowest of any airline in the world. Whether measured by cost per available seat kilometre (CASK), cost per seat, or cost per passenger, Ryanair's production of capacity and traffic costs it less than that of any of its competitors.

Even after adding in the extra services and ancillaries (for example bag fees, seat reservation, on-board purchases and insurance), Ryanair's average revenue per passenger is lower than that of any of its competitors.

With the possible exception of easyJet, no European airline has done more to change the nature of short-haul flying than Ryanair. It started the low-cost revolution in Europe by copying the business model of Southwest Airlines, but, after this initial act of imitation, innovation became the key to Ryanair's success.

As Southwest evolved from the original purist LCC model, for many years Ryanair simplified it further and developed an even purer form. It 'out-Southwested' Southwest.

Direct (on-line) distribution, on-line check-in, automated bag drop and hand luggage-only travel are now all a commonplace part of the experience of short-haul flying in Europe, mainly thanks to Ryanair innovations. In addition, Ryanair also opened up relatively unknown regions of Europe to air travel with its network of smaller airports.

With more than 1,600 routes across 30 countries in Europe and North Africa, 186 airports (of which 69 are ‘bases’, where Ryanair bases aircraft and crew), Ryanair has the largest short-haul network of any carrier in Europe. It is number one by passenger numbers, with 83.4m in the 12 months to Aug-2014 (the Lufthansa Group flew 84.4m in the same 12 month period, but this figure included all its subsidiaries. 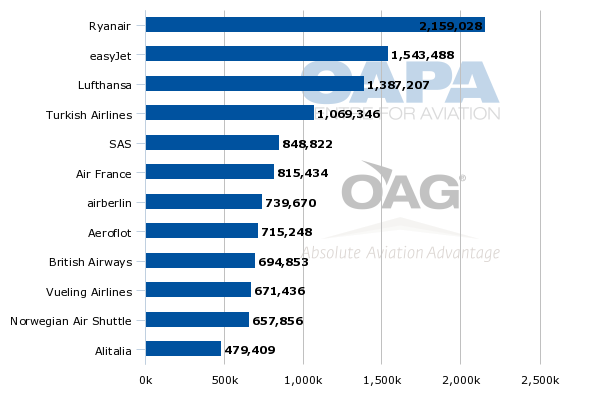 Ever since making the transformation to the LCC model in the mid 1990s, Ryanair has operated with a single aircraft type, the Boeing 737. Initially, these were 737-200s, but the airline took delivery of its first 737-800 in 1999 and it has operated only the latter variant since 2005. Operating a single fleet provides economies of scale and flexibility in terms of aircraft deployment, crew rostering and crew training.

Ryanair has built on its strong financial position to place significant orders with Boeing in the past, in 2001 and in 2013. Although the pricing of these orders has never been made public, its strong negotiating power - and willingness to trade off the two large manufacturers - has undoubtedly provided Ryanair with significant discounts to list prices and, importantly, lower prices than most competitors. In turn, this has fed into Ryanair's unit cost advantage. The Sep-2014 order for up to 200 Boeing 737MAX aircraft (100 firm and 100 options) continues this approach (see Opportunities below).

Under the leadership of CEO Michael O'Leary, who has been with the company since 1988 and CEO since 1994, Ryanair's management has shown a strong focus on doing what it does best: keeping costs and fares low. This does not mean that it has been afraid to innovate (see above), but innovation has generally been aimed at finding new and better ways to keep costs and fares low. For example, the introduction of bag charges was aimed at reducing the number of checked bags, thereby reducing handling costs.

For many years, Ryanair has trumpeted its success in providing what it believed customers want, namely safe air travel at a low fare and with high levels of punctuality. Indeed, this is the core of what short-haul passengers require from a low-cost carrier. However, for many years, Ryanair's brand has performed poorly in a range of polls, surveys and awards.

As for the industry in general, Ryanair’s earnings are highly seasonal, with its profits increasingly relying on a strong northern hemisphere summer, in particular its 2Q (July to September) to offset a loss-making winter (October to March).

This pattern of seasonality has become more pronounced since 2008/09, since when it has consistently made losses in at least one of the winter quarters, by contrast to the previous 10 years of profits in all four quarters.

In 2013, Ryanair signalled moves towards enhancing the quality of its passengers' interactions with the airline. This included a re-designed website, with a more attractive look and feel and with fewer clicks to make a booking; a new mobile app; the reintroduction of allocated seating; a relaxation of baggage restrictions (for both on-board and checked bags); a reduction in the charges levied for printing boarding passes at the airport and for making changes to bookings.

The changes have progressively taken root during 2014 and it is too early to evaluate their impact. Improved profits in 1QFY2015 (Apr-2014 to Jun-2014) are a good sign, but it will take much longer than that to effect a lasting shift in customer perceptions. At least it can be said that the changes have not so far had a negative impact on Ryanair's profits.

Following the initiatives to improve customer service, Ryanair has also recently launched its business traveller product. This is a bundled product offering a range of features for a single fee, including booking flexibility, fast lane security, choice of reserved seating in 'premium' rows (front row, over wing with extra legroom), and a checked bag.

In addition, Ryanair has been adding more primary airports to its network and is increasing the frequency of operations on certain more business-oriented routes. 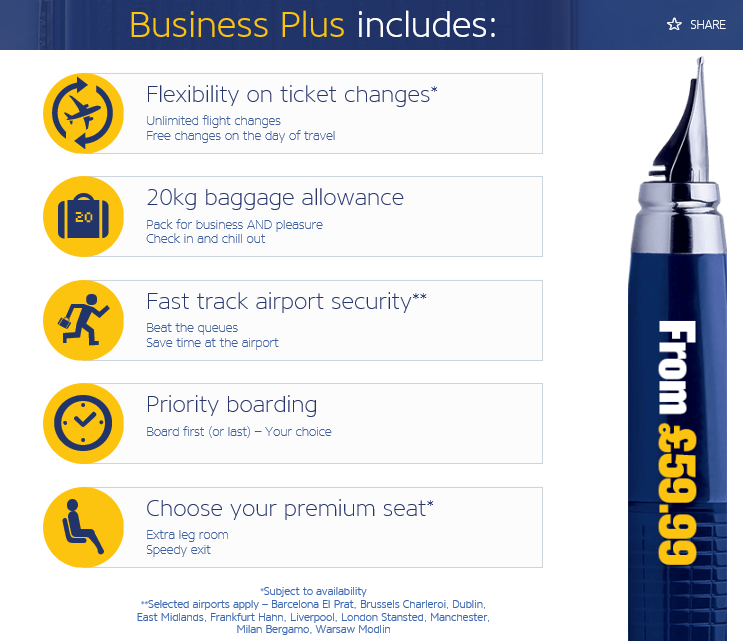 The increased fuel efficiency of the CFM LEAP-1B engines, together with winglets and other aerodynamic improvements will reduce fuel consumption by up to 18% in Ryanair's configuration and reduce operational noise emissions by 40%. The extra seating will further contribute to unit cost reductions. In addition, new slimline seats will allow for more legroom compared with Ryanair's 737-800 aircraft.

The price of the new aircraft has not been disclosed, but Mr O'Leary told a press conference that Ryanair would pay a small premium per seat to the price agreed for 180 737-800 aircraft ordered in 2013 (and which sees its first delivery in Sep-2014), justified by the unit operating cost savings and the additional revenue generated by the eight more seats. It is likely that Ryanair has secured a significant discount from Boeing's list prices at better terms than have been offered to competitors.

Allowing for the existing 737-800 order and factoring in planned aircraft disposals, Ryanair says that the MAX order will allow it to grow its fleet from 304 today to 520 in 2024 and to take annual passenger numbers from 82 million to 150 million. This represents average annual growth of 6% pa over the next 10 years, compared with 13% pa achieved over the past 10 years.

The planned growth rate is a little higher than likely market growth, but Ryanair's unit cost advantage, enhanced by the new aircraft, should allow it to make further market share gains. Moreover, the slowing of the long term growth rate compared with the past should help to support fares. 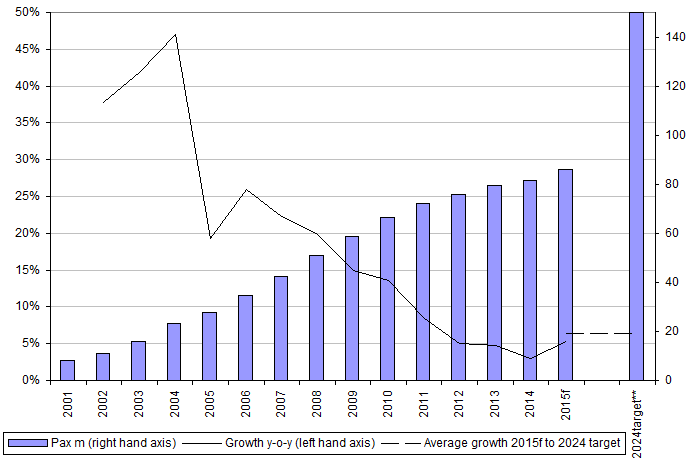 To date, Ryanair has a strong safety record, although there have been frequent suggestions in some sections of the media that its low-cost approach means that it cuts corners on safety. These suggestions have never been substantiated and Ryanair has not been afraid to defend its reputation in the courts with litigation. Nevertheless, the perception lingers and a major accident could be harmful to Ryanair's reputation and detrimental to its growth plans.

Any significant distraction of management attention away from its core competence of providing safe and punctual short-haul air travel at low fares could damage its track record as one of the world's most consistently profitable airlines.

The only real threat to this focus over the past decade or so came from Ryanair's attempts to buy its Irish rival Aer Lingus. This would have been a major acquisition of an airline with a different business model, network and fleet and would have consumed significant management time. Fortunately for Ryanair and its shareholders, these attempts were thwarted by a combination of competition regulators and the Irish government.

It is now unlikely that Ryanair will seek to make other acquisitions of a similar scale. The 2003 purchase of LCC Buzz from KLM was an opportunistic way of increasing Ryanair's presence at London Stansted and immediate access to 11 French regional airports; and its smaller scale meant that it was not a major distraction.

Ryanair has expressed interest in acquiring Cyprus Airways from the Cypriot government. At only around 3% of Ryanair's size by revenues, this would not be a major acquisition and could provide Ryanair with additional opportunities for growth in Greece, the eastern Mediterranean and Middle East.

Ryanair's recent moves to soften its public image and to attract more business passengers are an evolution from its previous purist LCC approach, but should not permit a loss of focus. While it is true that increasing the number of primary airports in the network and relaxing bag restrictions, for example, may add a little to average unit costs, Ryanair will remain focused on having lower unit costs than any of its competitors. Moreover, any additional costs in these areas should be more than offset by additional yield.

Ryanair has a level of unit cost that is unlikely to be matched by competitors in Europe and so other airlines are unlikely to be able to compete with it on price. However, Ryanair's moves to enhance the perception of its product and brand and to attract more business passengers will have an impact on the basis of competition.

It will still compete mainly on price, but there will also be an extent to which other dimensions of competition will play a part. For example, passengers will also base their purchase decision on factors such as frequencies, the quality of the airport network and their level of satisfaction with their overall interaction with the airline. In these areas, there are plenty of airlines that can compete favourably with Ryanair.

Ryanair's 1QFY2015 results, reported in Jul-2014, demonstrated that it is back on a profit growth path after a rare fall in profits in FY2014. Indeed, it raised its profit guidance to a level that still looks comfortably achievable.

Its results for the first six months of calendar 2014 demonstrate that it remains Europe's most profitable airline, measured by operating profit margin, based on having the lowest unit costs.

Overall, the new Boeing order should enable Ryanair to maintain its unit cost advantage in European short-haul well into the future, allowing it to grow a little faster than the market by taking share from higher cost rivals.