Ryanair’s shares slipped 1.3% on Friday, as the carrier announced plans to reduce the number of services at Shannon Airport by 75% from Apr-2010 following the end of its current contract with the airport.

Shannon Airport Authority separately confirmed it would not be entering into a five year deal with Ryanair citing the carrier’s demands to end the EUR10 tourist tax and a 50% reduction in airport costs as unreasonable.

Ryanair CEO, Michael O’Leary, in an interview with the Financial Times on 01-Nov-2009, stated the LCC does not need to secure an agreement with Boeing for additional aircraft for the post-2012 period (when the carrier is expected to reach its 90 million passengers p/a target), and that the carrier could instead shift to a strategy of rationalising routes, building up cash and paying dividends to shareholders.

According to Mr O’Leary, “if we order no more aircraft the fleet will be at 300 aircraft by 2012. We may not grow at all after 2012. [Not growing] would allow us to weed out some of the poorer routes, some of the poorer aircraft bases, and switch those aircraft to new opportunities, while building up cash and distributing some money to shareholders”.

Ryanair is scheduled to release its financial results for the three months to Sep-2009 today.

In the Middle East, Jazeera Airways celebrated its fourth anniversary on 30-Oct-2009. The carrier transported 1.6 million passengers in the 12 months ending Oct-2009, a 22.0% year-on-year increase. Jazeera also announced plans to increase its fleet from ten A320s and extend its network to more destinations in 2010.

AirAsia CEO, Tony Fernandes, stated that due to “green shoots” of recovery in the economy, yields are expected to imrpvoing moving forward. Mr Fernandes added that the carrier’s load factor to remain strong in 2010, after reporting a load factor of 75% for 2Q2009.

According to Mr Fernandes, “our business is great. Our passenger numbers are up even during the puasa (fasting) month. Ancillary incomes are coming up very fast and we’re getting rights to many destinations”. Ge added, “even if it [fuel prices] reaches USD100 per barrel we’re ready for it. We are okay at the moment…Fuel price is a fake price. Eventually it [price] will settle on real demand”.

Jetstar to launch service to Europe, but not in direct competition with AirAsia X: Qantas CEO 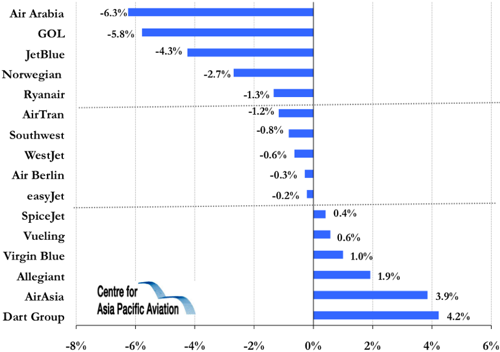