Mr Millar commented, “we’re in the midst of recession and we expect to slow down our growth. We’ve had a lot of discounting of fares as we’ve grown the business. We expect to increase profits by the combination of reducing costs and we think average fares will probably rise.”

In the US, JetBlue Airways spokeswoman, Alison Croyle, stated the LCC has been studying a possible move of headquarters from New York to Orlando for more than a year, commenting, “we’re still evaluating options and anticipate a decision in the first half of this year”.

The carrier, which has been expanding its US-Caribbean network, is considering moving at least some offices to Orlando, with any decision to effect the corporate headquarters as well as the finance department operations in Connecticut. However, it would maintain its operational home at New York JKF Terminal 5, which handles approximately 23% of the carrier’s daily departures. 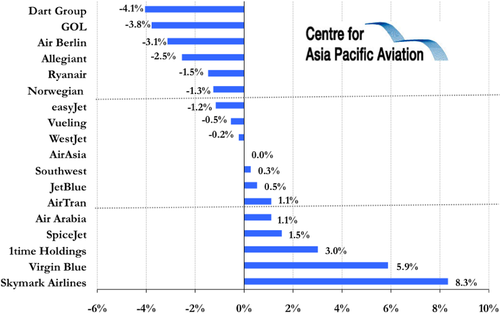