Ryanair stated it has overtaken Iberia as the largest carrier (by passenger numbers) operating in Spain, based on AENA data.

The carrier also officially opened its newest (and 42nd) base at Barcelona El Prat Airport on 01-Sep-2010, basing eight aircraft at the airport and operating 23 routes from there.

The carrier will operate more than 400 weekly services to/from the airport which is expected to result in 2.5 million passengers p/a. Ryanair’s El Prat routes will sustain more than 2,500 local jobs as well as 400 direct Ryanair jobs among pilots, cabin crew and engineers, according to the LCC.

CEO Michael O’Leary said that with the opening of the new Barcelona base it would reduce the number of services from the UK and Ireland to Girona and Reus unless AENA reduced costs for operating from the small Spanish airports. According to Mr O’Leary, Girona and Reus airports have similar running costs to Barcelona and Madrid airports. The carrier is in negotiations with AENA.

In the German market, the Government announced the final details of its new passenger levy, which is schedule to come into effect on all flights from 01-Jan-2011 and on tickets booked from 01-Sep-2010.

Passengers will be charged EUR8 for services in Europe, EUR25 on flights of 2,500 to 6,000km and EUR45 on flights to long-haul destinations. Earlier drafts of the legislation proposed a EUR13 charge on flights under 2,550km and a EUR26 charge on sectors above that distance. The levy is expected to raise EUR1.2 billion p/a, and is part of the German Government's EUR80 billion cost-cutting and fund-raising package.

Air Berlin and Lufthansa separately expressed their opposition to the new levy, labelling the tax a “disaster” that will cost airlines more than it raises the government. Air Berlin commented: “This is a disastrous, go-it-alone move by Germany that’s aimed at helping the budget but will misfire economically. The costs will be borne by the little guy."

Lufthansa raised similarly objections, stating the initiative would weaken Germany’s position as a global hub for air transport and adding: “The relation between the levy rate and distance flown is a heavy burden to pay for an export nation like Germany. This step is an economic stimulus programme for foreign airlines and airports."

Shares in Air Berlin, however, gained 2.7% in stronger day of European trading yesterday.

Among the non-listed European LCCs, Monarch reported a 5% increase in passengers in Aug-2010 to slightly under 485,000, with an average passenger load factors at an impressive 93.9% (+3.6 ppts). 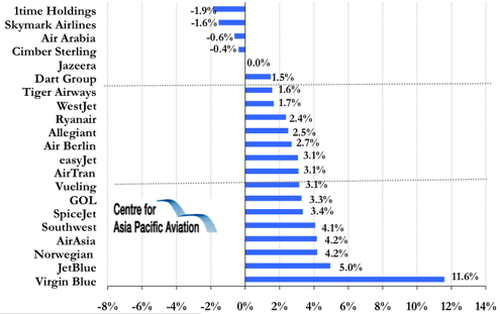