Ryanair announced plans to open its 40th (and first Central European) base at Kaunas (Lithuania) in May-2010 with two based aircraft and 18 routes (9 of which will be new).

Ryanair, which plans to invest USD140 million at Kaunas Airport, also confirmed that it is in continuous negotiations with four other Central European airports to open new bases. Shares in Europe’s largest LCC gained 1.0% yesterday.

GOL’s shares jumped 7.5% yesterday, as a rising Brazilian Real pointed to lower costs for the Brazilian LCC, with the share price gains at GOL and TAM helping boost the Bovespa Index, which rose the most since Nov-2009.

JPMorgan Chase & Co stated it expects the Brazilian Real to finish 1Q2010 at BRL1.80: USD1, up from a previous forecast of BRL1.65: USD1. Separately, Brazil's central bank bought US dollars at an auction yesterday for BRL1.8455 to the USD dollar. The Real ended at BRL1.8736 to the US Dollar in trading on the Brazilian Mercantile and Futures Exchange yesterday.

In the US, AirTran’s shares soared 8.0%, as the carrier announced that the Transportation Workers Union ratified (by an “overwhelming margin”) a new 48-month collective bargaining agreement. The agreement covers AirTran flight dispatchers that work at the company's System Operations Control Centre in Orlando.

Southwest being investigated by FAA…again

Southwest’s shares were up 3.6%, despite the Federal Aviation Administration confirming it is investigating whether Southwest followed safety orders regarding the maintenance of its older B737 aircraft. 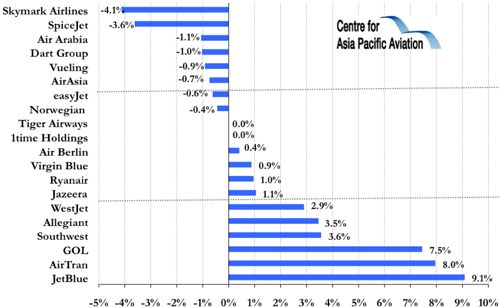