Ryanair’s shares slipped 2.6% yesterday, on the same day the carrier stated it wants to conclude an order for 200 aircraft from either Boeing or Airbus by the end of 2009, for delivery after 2012.

CEO, Michael O’Leary, told Reuters, "if for some reason we can't conclude an agreement with Boeing and Airbus, certainly by the end of the year, we will simply announce we are not going to buy any more aircraft". He added, “we will then stop growing beyond 2012 when our current delivery stream runs out."

In the US, Southwest’s shares were up 0.4% yesterday, as the carrier released its Spring 2010 travel schedule (14-Mar-2010 to 07-May-2010). Through the continuation of the airline's flight optimisation exercise, Southwest is adding 62 services and eliminating ten, for a net gain of 52, with the schedule reflecting seasonal travel patterns where demand increases during the Northern Spring. 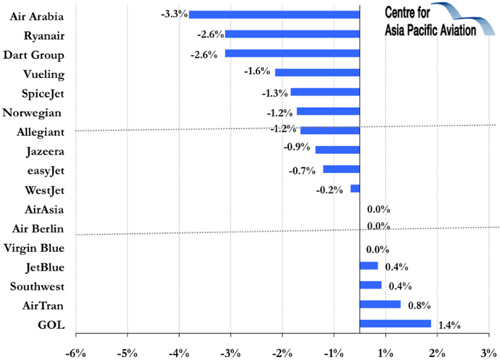