Ryanair falls on analyst downgrade; plans for new competitor for Aeroflot up in the air

Ryanair (-1.8%) fell on news RBS downgraded the carrier’s shares from ‘Buy’ to ‘Hold’. The analysts stated that Ryanair’s shares have risen 21% in the past two months on the clarification of its fleet plans earlier this month.

RBS added it expects Ryanair to increase its guidance at the announcement of its 3Q2009-10 results, but this move has already been anticipated by the market, and there is now a lack of newsflow to continue driving the stock up.

Plans for new competitor for Aeroflot up in the air

Aeroflot (+3.6%) was meanwhile up on news State company, Russian Technologies, has cancelled plans to establish a competing national airline, and is considering swapping its ownership of Rosavia and Rossiya for a 28% stake in Aeroflot, from the National Reserve Corporation.

Rosavia, 49%-owned by the Moscow Government, is being developed to absorb carriers that have struggled amid the global financial downturn and increasing fuel prices. However, the new carrier seems to have run into its own difficulties, delaying an announcement of the results of a USD2.5 billion tender for the purchase of 65 aircraft. 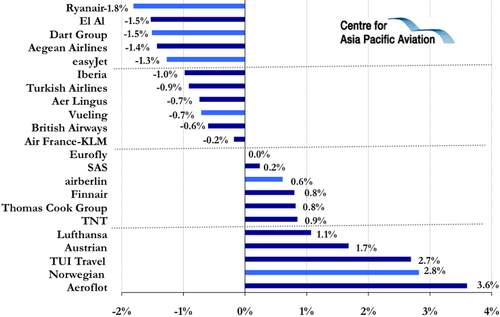