Despite the recent increases and pricing volatility, oil prices posted their first monthly decline since Jan-2009 in Jul-2009, ending the month USD0.44/barrel below 30-Jun-2009 levels.

Leading the LCC gainers yesterday was SkyEurope, which jumped 7.4% on news that the struggling Eastern European LCC has signed two separate financing agreements to provide additional liquidity for the business. Austrian investor group, FOCUS Equity, signed an agreement to provide new equity investment of up to EUR16.5 million in SkyEurope (conditional upon a number of factors, including the successful completion of the financial reorganisation of the carrier, while the carrier also signed a short-term EUR5 million loan agreement with Chain Box Technology. This bridging agreement will be used to complement internal cash flow for working capital requirements until permanent funding is in place under the financing agreement between SkyEurope and FOCUS Equity.

Also in Europe, easyJet and Air Berlin both gained, up 2.6% and 1.8%, while Ryanair slipped 0.6%. Ryanair on Friday announced the award of a mandates to a syndicate of banks for approximately USD1.6 billion of financing for 55 aircraft delivering between Nov-2009 and Oct-2010. 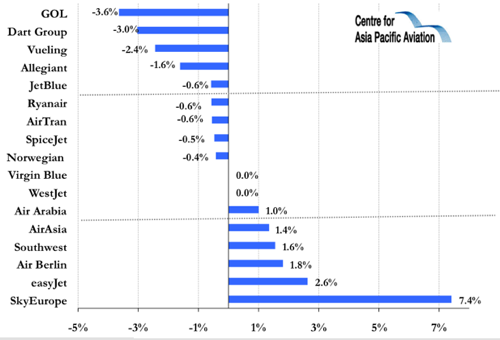