Russia’s Red Wings is embarking on an expansion of its new scheduled operation with the announcement of six new domestic routes from Moscow Vnukovo Airport. The new routes, announced over the last month, will join the airline’s initial scheduled route, Moscow Vnukovo-Kaliningrad, which was launched on 25-Jun-2012. Red Wings, which was founded in 1999, previously only operated leisure charter services on behalf of tour operators.

Red Wings is owned by Russian businessman Alexander Lebedev who also owns 15% of Russian state carrier Aeroflot. Mr Lebedev is reportedly attempting to sell his Aeroflot stake to the Russian Government to raise funds for fleet expansion at Red Wings.

Red Wings currently operates a fleet of eight Tupolev Tu204 aircraft from Moscow Vnukovo. In Mar-2012 it was reported the airline may purchase 15 additional Tu204 aircraft, which represents a less ambitious expansion plan than the 44 additional Tu204s the carrier originally planned to acquire. The airline is now focused on the Tu204 although it also looked at acquiring second hand A320 or A321 aircraft back in 2008.

The intended expansion of the Tu204 fleet signifies Red Wing’s plans for a much larger network in future, including more scheduled services. But this expansion may depend on the successful sale of Mr Lebedev’s Aeroflot stake.

The six new scheduled domestic routes include services which have already been launched to Kaliningrad, Yekaterinburg and Makhachkala. Flights to Makhachkala will be added on 24-Sep-2012, followed by Krasnoyarsk and Novosibirsk on 01-Oct-2012.

All six of the new Red Wings scheduled routes are operated by other carriers, primarily UTair or Kuban Airlines. Three of the six destinations - Kaliningrad, Ufa and Makhachkala - feature in the top 10 routes (based on seats per week) from Moscow Vnukovo, according to Innovata data. 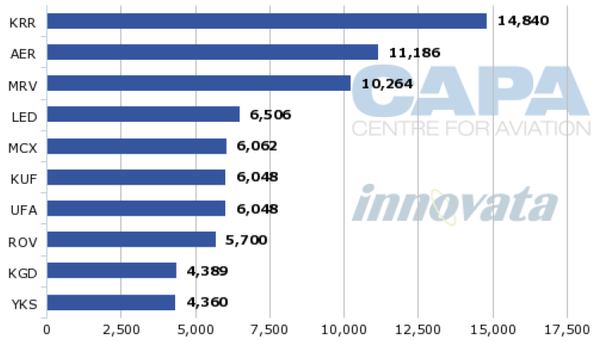 Red Wings to be up against much larger carriers

Red Wings will be up against much larger carriers at Moscow Vnukovo, particularly UTair. According to Innovata, UTair currently contributes over 70% of domestic capacity from Moscow Vnukovo and 16% within Russia overall.

Outside of Moscow Vnukovo there is even more competition, though indirect, with Russia’s largest carriers - Aeroflot, Transaero and S7 Airlines. Aeroflot, which currently accounts for about 19% of domestic Russian capacity, operates from Moscow Sheremetyevo. S7 Airlines and Transaero operate from Moscow Domodedovo and account for about 15% and 7% of total Russian domestic capacity, respectively.

In addition to the competition it will face at Vnukovo, Red Wing’s initial scheduled destinations are also currently operated by at least one carrier from both Moscow Sheremetyevo and Moscow Domodedovo, with the exception of Moscow Sheremetyevo-Makhachkala which is not currently operated. With up to four competitors operating from Domodedovo to each of Red Wing’s initial destinations, Red Wings will be facing a hefty task to compete effectively in the markets it has selected.

Red Wings’ entry into scheduled operations will see it compete with much larger carriers such as UTair, Yakutia Airlines and Kuban Airlines from Moscow Vnukovo Airport and with even larger airlines from the other Moscow airports. While it continues to operate a small fleet and network it may struggle to make much of an impact and find a profitable niche in the crowded Russian market. Red Wings could get the operating scale and larger network needed to compete more effectively if its fleet expansion materialises as planned. But rather ironically this hinges on Red Wings' owner successfully selling his stake in Aeroflot, which has emerged as a competitor to Red Wings as the carrier expands into the domestic scheduled market.