Kuwait-based Jazeera Airways (+3.0%) rose. The carrier announced it was the largest operator at Kuwait International Airport in 1Q2010, with 4,549 aircraft movements and an on-time performance of 93%. Jazeera has operated at an on-time performance above 90% for every year since it launched in late 2005. In 2009, the airline carried more than 1.8 million passengers, capturing more than 24% market share.

In Africa, Comair (+3.5%) was the day’s only gainer, moving with South Africa’s JSE Index (+1.9%), which is at its highest point since Jul-2008, reflecting increasing oil and commodities prices. 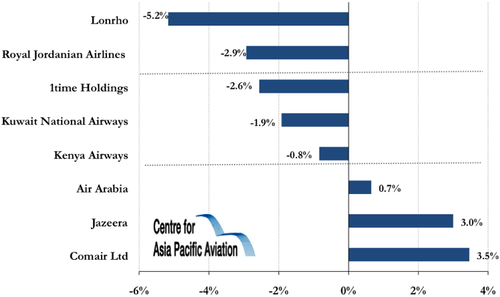