Rome comes in at number 26 in top 30 airports

Alitalia, the Italian national carrier, has had a difficult couple of decades. As a result, the key Italian airports have been equally challenged, especially in the first decade of the 21st century.

Alitalia out of bankruptcy ... and Milan

Since its most recent reorganisation in 2009, following bankruptcy, the airline has firmly planted its (smaller) self at Rome’s Fiumicino airport, abandoning the previous dual hub philosophy in which Milan had been the winner.

While the city of Rome is more populous than Milan, the metro area is only about half the size of that of Milan and even smaller than the nearby Naples region. Alitalia may be the only flag carrier in the world that is not based in the nation’s most populous metro region.

Plus there is the additional complication in Milan of two airports, Malpensa which is designed for long-haul service, and the much more convenient Linate, used for many inter-European and domestic services.

Far from the recent norm

The restructured carrier operates in a much different mode than it did in its pre-bankruptcy days as shown by the following chart.

In order to fill the service gap at Milan, AZ has established a shuttle-type service called ROMAMILANO that provides an air bridge to FCO, on one of Europe’s busiest routes. However, given the relatively few AZ destinations available once in Rome, there is a high likelihood that passengers are simply choosing other routings and carriers from Northern Italy, resulting in relatively few long-haul connections. 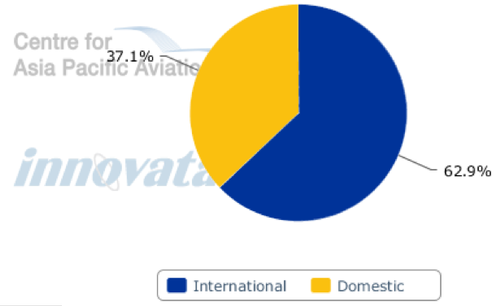 This traffic split, combined with a high-speed rail service that connects many Italian towns with the capital, gives FCO a dominant international traffic share.

Present, but far from dominant, especially on intercontinental routes

Though AZ remains the dominant airline at the airport at 46%, it has a great deal of competition with the “other” segment, accounting for just about a third of the seats available. Many of those seats are on the likes of Cathay, Thai and the Gulf carriers that likely carry the majority of passengers to South and Southeast Asia, routes pretty much abandoned by the reincarnated Alitalia. 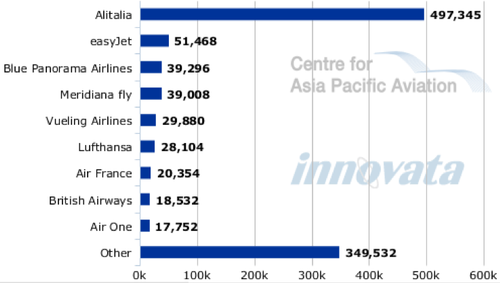 The choice between Rome and Milan

All of this has had an interesting outcome in Milan, Italy’s richest metro area, in which AZ ranks number four at Malpensa, behind easyJet, Lufthansa and Air One, with the largest number of seats provided by “other”.

Consequently, for travel to much of the world, Italy’s national carrier is a non-player and the Italian airports are far less dependent on the “home team” than is the case at most European airports.

Though the airport has a majority of its seats in the international market, the following chart reveals that most of those seats are destined to nearby European destinations, with generally very small numbers associated with longer haul intercontinental points.

Given the minimal service available at Rome, many of those European seats are probably occupied by passengers with longhaul connections. 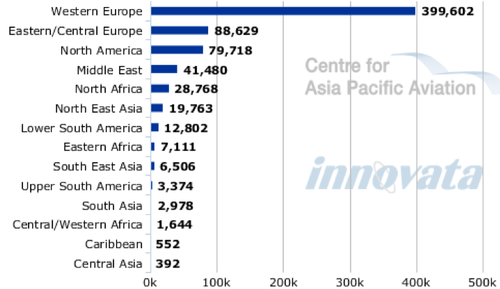 Unlike Malpensa, where LCCs supply one third of the seats, FCO has a relatively small low-cost presence, with much of that located at Rome’s other airport Ciampino (CIA), where Ryanair dominates, and 100% of the seats are on LCCs. 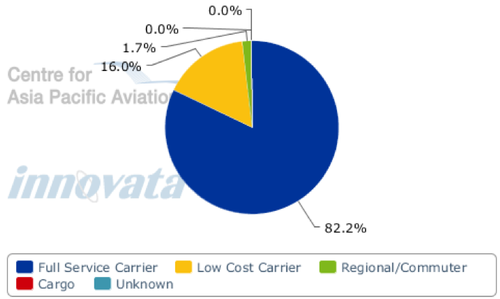 Good, not great, for SkyTeam

Furthermore, unlike most European hubs, the home carrier’s alliance is not dominant with just over half of the seats provided by SkyTeam airlines. At Malpensa, Star is the top dog due to Lufthansa’s presence. 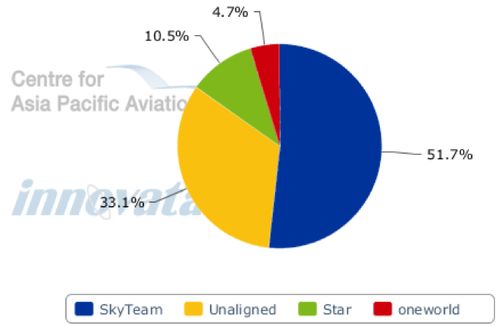 Average fares for the 4276-mile trip to New York range from a February low of USD786 (USD0.18/mile) to an August high of USD2135 (USD0.50), which is a rather hefty fare, compared to other European hubs. In looking at the individual highs and lows by date, the lowest fares were consistently provided on Delta while the highest fares were on Alitalia, with as much as a USD1700 difference between the two in August.

Not a transit airport

Unlike most European hubs, Rome is probably predominantly an O&D airport, serving the needs of travellers to the city, but providing relatively few onwards connections. A quick look at the onwards connections to Beirut and Tel Aviv show that the preferred inbound connection from North America is provided not by AZ but by partner Delta.

While the historical and religious significance of Rome make it a popular tourist destination, Italy’s industrial north has a far greater corporate focus. With an ageing demographic and essentially flat passenger numbers at FCO, there is a good possibility that Rome will see a decline over time in its position on the ACI list.