Rolls-Royce reported a record year for revenue in 2009, with group revenues surpassing GBP10 billion and the company’s order book growing to GBP58.3 million, of which Boeing civil aerospace accounts for GBP47 billion.

Civil aerospace, the company’s largest business component, made “considerable progress over 2009”, although Rolls-Royce noted that volatile trading conditions and the continuing effects of major programme delays, including the A380, B787 and A400M, impacted performance. Original equipment revenue was up marginally, while services revenue was down, keeping overall civil aerospace revenue “stable” at GBP4.5 billion. All other business segments reported growth, with defence aerospace up 19.3% to GBP2 billion, the marine business growing 17.5% to GBP2.6 billion and the energy unit revenue up 36.2% to GBP1 billion.

The total number of parked aircraft remained stable over 2009 at around 2,700.

2010 underlying revenues and profits are expected to be “broadly similar to those achieved in 2009” according to CEO, Sir John Rose. The company intends to continue to reduce its exposure to North American and European markets (which represent 66% of revenues). Almost 50% of the company’s order book is now for business related to Asia, the Middle East and South America. Rolls-Royce expects to benefit from its ability to access the world’s faster growing markets where there continues to be demand for investment in transport and infrastructure.

In civil aerospace, Rolls-Royce expects underlying profits are expected to be modestly lower in 2010 than in 2009. The company sees some improvement in air travel and airfreight traffic from subdued levels, although the sustainability of these trends is “uncertain”.

The manufacturer anticipates “further detrimental mix changes in revenues”, with launch costs for new programmes having an impact. Increased charges from R&D are expected due to increased activity associated with these early phase programmes, such as the Trent XWB. Services revenues are expected to increase by approximately 10% cent in 2010, partly benefiting from improved foreign exchange achieved rates. Improved GBP to USD rates will help mitigate some of these effects, according to Rolls-Royce. 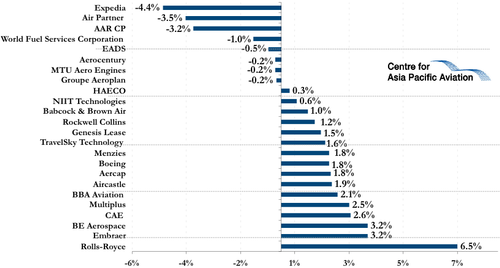