Rolls-Royce Group forecast underlying revenues would increase in 2009, despite the fact that the engine manufacturer sees no evidence of a sustained and general return to growth across its market. In its Interim Management Statement for 01-Jul-2009 to 02-Nov-2009, Rolls-Royce stated that trading activity across the group’s businesses remains “in line with expectations” and underlying profits are expected to remain “broadly similar” to 2008.

The company also expects a modest cash outflow in 2009 and an increase in the average net cash balance. Even in the face of the recession, Roll-Royce has managed to increase its order book, despite some minor cancellations.

Rolls-Royce noted that, in Sep-2009, the airline recovery was lagging the general business travel upturn. Although leading economic indicators were improving and the company forecasts GDP growth will return to growth in 2010, international airline passenger traffic has only just returned to positive levels, and yields are still depressed.

After a record level of aircraft retirements in 2008, Rolls-Royce forecast a continued high level of aircraft retirement during 2009, particularly of less efficient types as oil prices begin to spike. IATA noted in its latest airline financial monitor that aircraft utilisation has been decreasing, and while carriers have grounded 370 aircraft this year, they have taken delivery of more than 900, increasing the commercial aircraft fleet by approximately 2%.

Rolls-Royce forecasts  passenger traffic to be positive for the final quarter of 2009. Overall, the manufacturer expects traffic to decline 3% in 2009, while 2010 will see growth, but no strong rebound in traffic. 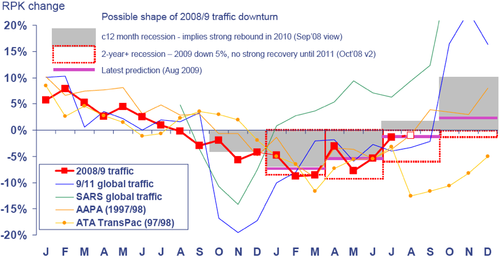 In trading yesterday, Rolls-Royce was down 1.9%, while German engine manufacturer, MTU Aero Engines, was up 1.6%.

Lessor Aerocentury, down 6.2%, continued the leasing companies' slide of recent days, although several others recovered a little of recent losses, while Rockwell Collins (-3.0%) also lost following its announcement of a sombre outlook.