The easing of many domestic border restrictions in Australia will give a shot in the arm – so to speak – to the airline industry as airlines ramp up their interstate networks again.

Domestic operations have been a lifeline for most airlines in the prolonged absence of international routes. However, the emergence of the delta strain of the virus also caused Australian domestic services to wither through much of the second half of 2021.

While some international routes were set to return from 01-Nov-2021, flights will still be fairly slow to rebuild, and it is still unknown how soft international demand will be.

In domestic networks, on the other hand, capacity is set to roar back fairly quickly, and domestic demand proved to be very resilient in 2020 after the first wave of COVID-19 cases subsided.

All of this means that the removal of some of the major interstate restrictions is a very big deal for Australian airlines. And nowhere is this more true than in the Sydney-Melbourne market, the busiest of the so-called triangle trunk routes between Sydney, Melbourne and Brisbane.

Sydney-Melbourne is the heavyweight in the local market, and also globally significant

Not all Australian states have relaxed their rules, with Western Australia still a notable holdout. But rising vaccination rates have triggered changes for Australia’s two largest states.

Fully vaccinated Sydney residents are now allowed to visit Melbourne, and vaccinated Melburnians were able to visit Sydney from 1-Nov-2021. This will result in the Sydney-Melbourne route returning to its previous prominence as airlines increase flights again.

The importance of the Sydney-Melbourne route is shown by the chart below.

It was the top domestic route before the pandemic, followed by the other two “golden triangle” routes: Sydney-Brisbane and Brisbane-Melbourne. Only two international routes made the top 10: Sydney-Auckland and Singapore-Sydney. All of the remainder were domestic interstate flights.

Another way to illustrate the significance of the Sydney-Melbourne route is the oft-cited statistic that it is historically one of the top domestic routes in the world. Before the COVID-19 pandemic it was ranked sixth globally as measured in weekly seats, as the chart below shows.

However, the arrival of the first wave of COVID-19 changed the situation dramatically as interstate travel restrictions began. Capacity dropped to skeleton levels from Apr-2020 through late Nov-2020, before recovering in late 2020 and early 2021.

It reached a mini-peak in Apr-May-2021, although this level was still below pre-pandemic volume. Then the emergence of the delta variant caused capacity to plummet again in Jun-2021. With the Victoria-New South Wales border reopening, scheduled capacity is due to climb rapidly. 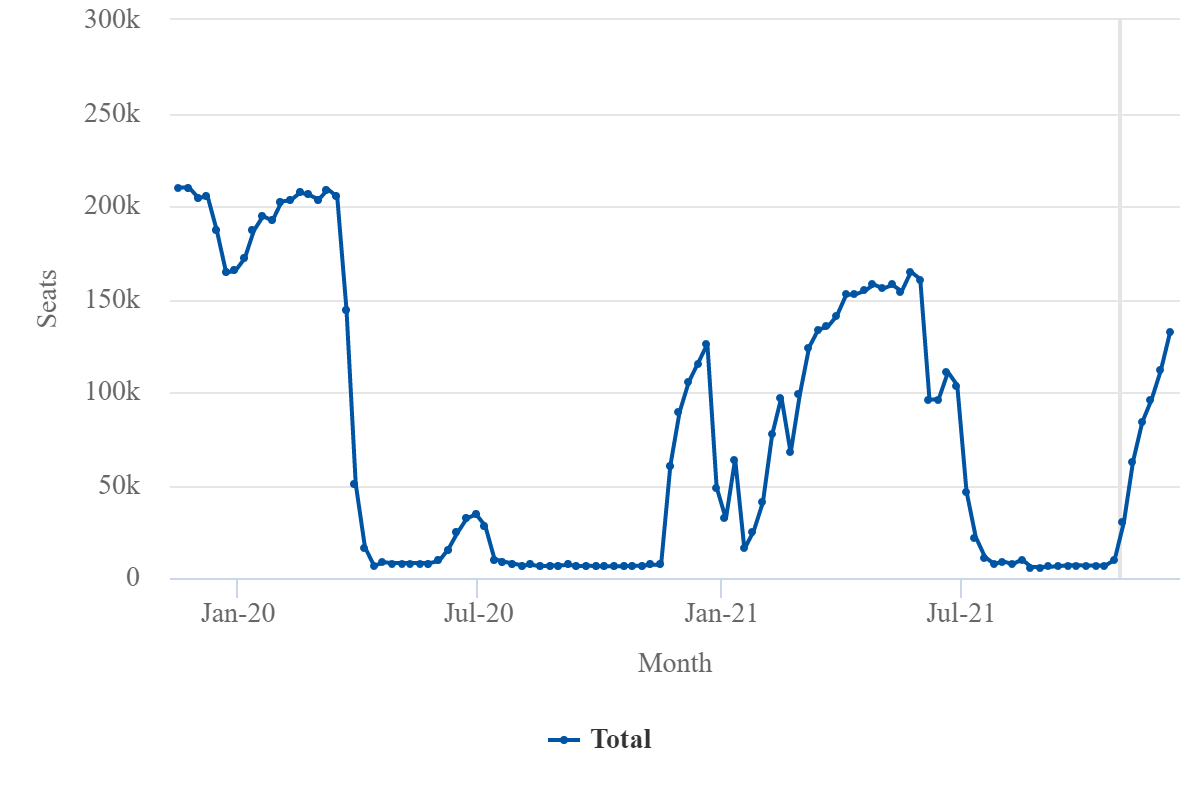 Intrastate versus interstate mix has varied widely during pandemic

When interstate travel was off the menu, the composition of Australia’s top domestic routes changed significantly.

During the first wave of the pandemic, routes within states (intra-state) assumed more importance. For example, the table below from 14-Sep-2020 shows eight out of the top 10 Australian routes were within states.

In May-2021, when domestic travel rebounded, Sydney-Melbourne reverted to the top of the list.

For the week beginning 24-May-2021, all but one of the top 10 comprised interstate routes. But the trend switched back again during the delta wave, as the table below shows. For the week of 25-Oct-2021 (the week before restrictions were lifted), seven of the top 10 routes were within states. All of the seven are within Queensland or Western Australia.

The top 10 domestic routes list is about to go through more big changes. Airlines are planning to ramp up services on the Sydney-Melbourne route, and this should mean that it reclaims the top spot during Nov-2021.

Qantas recently outlined its plans for expanding in the Sydney-Melbourne market after the removal of travel restrictions. The airline said it had been operating as little as one flight per day on this route during the latest lockdowns, but would fly up to 18 return flights a day – combined with the Group LCC Jetstar – after the state borders opened. It will lift this to 37 per day by Christmas.

However, this will still be lower than its pre-pandemic levels, when the Qantas Group was operating up to 58 returns per day.

Before the pandemic hit Qantas accounted for approximately 45% of weekly frequencies in the Sydney-Melbourne market. Virgin Australia had around 30%, Jetstar 17%, and Tigerair Australia 8-10%.

The chart below shows the period from Nov-2020 to Jul-2021 when services on this route recovered, before falling again. Frequency share jumped around a lot during that recovery period, but for the week of 10-May-21 the main players had broadly similar shares to the ones they had before the pandemic: Qantas with 40%, Virgin 30.5%, and Jetstar 21%.

One main difference was that Tigerair Australia was no longer in the mix, having been axed by its parent Virgin Australia. But Rex had entered this market with Boeing 737s, accounting for 8.2% of the frequencies for the week of 10-May-2021. This essentially replaced the Tigerair capacity.

Rex intends to resume flying in the Sydney-Melbourne market on 15-Nov-2021. The May-2021 capacity split probably indicates how this market will shake out over the next few months. 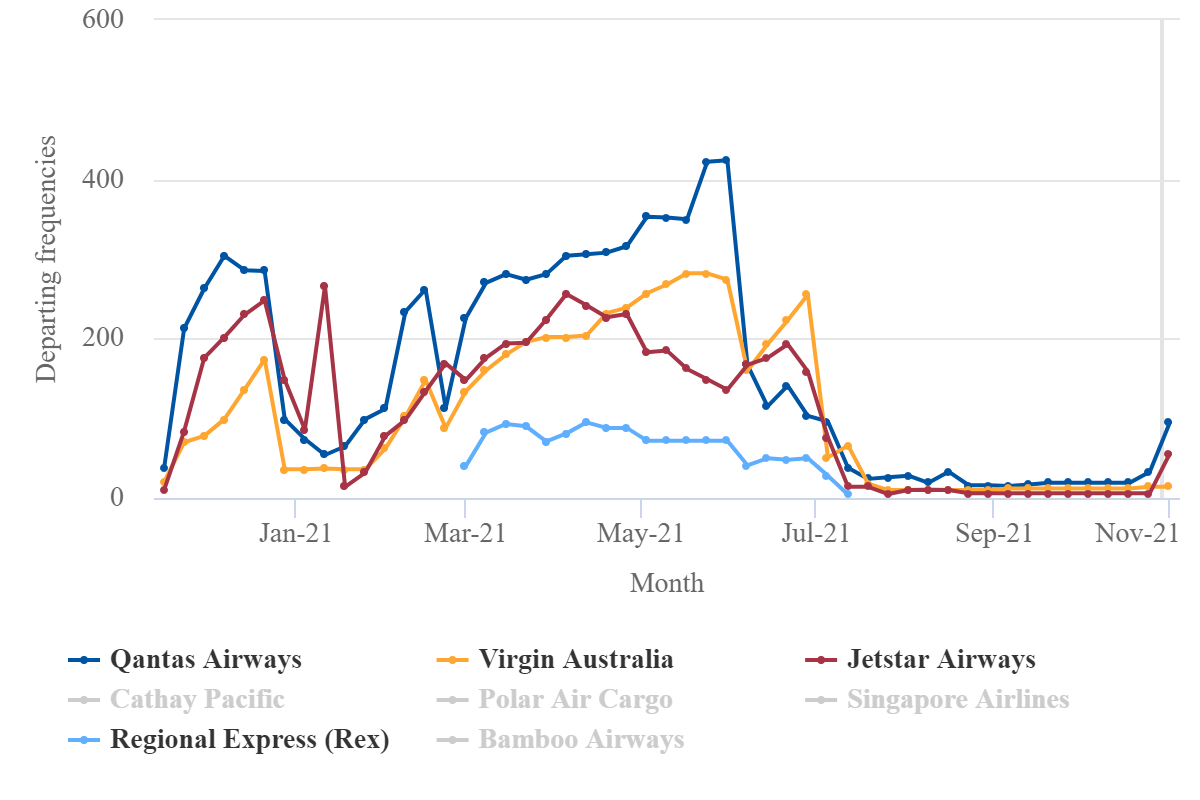 Competitive dynamics will reassert themselves quickly – but with a slight twist

Sydney-Melbourne is undoubtedly the most important market in Australia. Recovery in other markets will also be needed to return domestic networks to pre-pandemic levels, but resuming the busiest trunk route helps get aircraft back in the air and employees back at work. And with high vaccination rates allowing a change in approach to combatting the pandemic, there is hope that state border closures will not return. (Almost 90% of NSW residents over 16 are fully vaccinated, with 94% having at least a first dose; for Victoria the split is 81%/93%; and just under 80% of all Australians are fully vaccinated)

Recent experience justifies airline expectations that domestic demand will come back strongly as state border restrictions ease. Sydney-Melbourne is such a key route that demand may prove to be more resilient than in other domestic sectors, so it actually may not be a good indicator of the health of the broader domestic market.

The competitive dynamic on this route has changed slightly with the introduction of Rex narrowbody services.

Although there were also four main airlines in this market before the pandemic, Jetstar was part of the Qantas Group and Tigerair was a subsidiary of Virgin Australia. Now there are three independent competitive elements.

Rex may be much smaller than the other two, but it accounts for a not-insignificant share of capacity, with plans to add more. However, it is not technically an LCC like Tigerair (although its fares will be similar), so Jetstar will be the only LCC in the market, with Virgin pursuing a “value carrier” model. That said, it is unlikely the nature of the model will always be obvious from the prices each charges, because of the imminent fare battle emerging.

Another player in the market is likely in early 2022 as well. The start-up LCC Bonza plans to launch narrowbody services with MAX equipment in Australia next year, although it has indicated it will not focus on the “triangle” trunk routes and concentrate mostly on smaller city point-to-points.