Latvia’s national carrier airBaltic recently reported a narrowing of its net loss in 2012, with RASK up 15%. The carrier is just over a year into a five year profit improvement plan. It says that it is surpassing its original turnaround plans and is on track to achieve targeted profitability by 2014. Network restructuring, improved revenue management and the relative economic health of the Baltic region compared with other parts of Europe are providing tail winds.

With only modest capacity growth planned for 2013 and monthly profitability exceeding management’s plan for the first three months of the year, there may be potential for airBaltic to improve on its 2013 target of stable RASK and perhaps to reach a positive net result ahead of schedule.

Nevertheless, its unit costs are not as low as the LCCs with whom it increasingly competes and labour productivity lags peers. Its fleet modernisation programme should help to narrow the unit cost gap, but management will be hoping it can retain its current pricing power.

airBaltic narrowed its net loss in 2012 to LVS19 million (EUR27 million) from LVL85 million (EUR121 million) in 2011, an improvement of LVL66 million (EYR94 million). This improvement came in spite of a 1% fall in revenues to LVL229 million (EUR326 million), reflecting a significant reduction in operating costs. 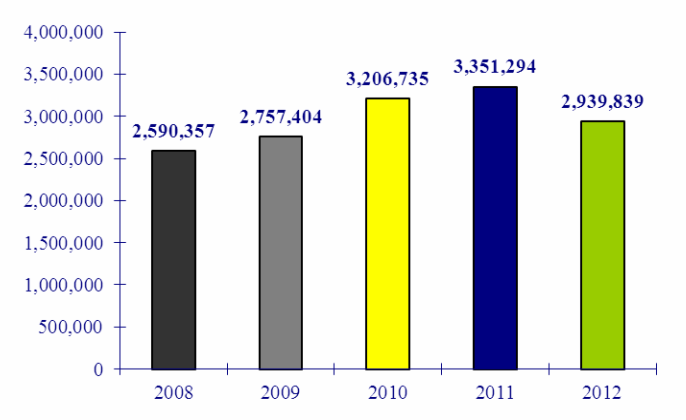 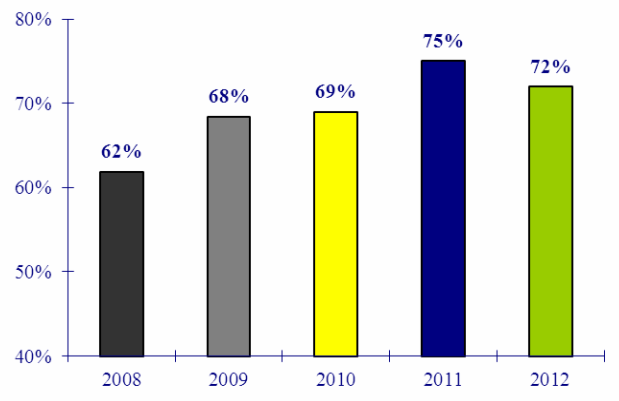 The company did not directly report its capacity (ASK), but the reported figures for revenues and RASK can be used to calculate that ASKs were cut by around 14% in 2012. Revenue reduction was limited to 1% due to a 15% increase in RASK, reflecting network improvements, a revised pricing policy and the relative economic health of the Baltic region compared with much of the rest of Europe. Average fares grew by 10% in 2012 to reach LVL68.3 (ER97.2.), which was 6% ahead of management’s budget.

CASK grew by 4%, but airBaltic has not reported details of the change in the different cost categories. Using calculated ASK figures and the reported CASK figure, we can calculate that operating costs fell by around 11%. We can also calculate that cost per passenger fell around 3%.

Losses in four out of the past five years

We can also use historic reported RASK and CASK figures to calculate airBaltic’s operating result going back to 2008. This, together with its reported revenues and net result figures, are shown in the chart below. The company has made losses in four out of the past five years. 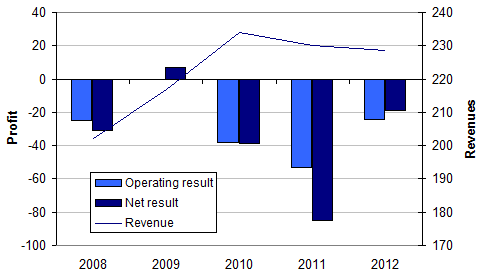 Our approach to calculating airBaltic’s operating loss suggests that, while still loss-making, its operating margin improved by around 20ppts in 2012. This is corroborated by the chart below, which shows the change in operating margins for a number of European airlines in 2012 and shows that airBaltic saw the biggest improvement.

Note: *Data for full year not available yet
Source: airBaltic

The narrowing of the net loss from 2011 to 2012 reflected the company’s profit improvement plan, which targets a positive result in 2014. The 2012 loss was better than airBaltic’s planned loss of LVL38 million (EUR125.6 million) and net results were ahead of plan in every month of 2012, apart from January.

The company made a profit in each of Jul-2012, Aug-2012, Sep-2012 and Dec-2012 and for the third quarter. Although no figures have been reported, airBaltic says that it has been ahead of plan for each of the first three months of 2013.

The company’s profit improvement plan, named ‘Reshape’, is based on operational efficiency, revenue improvement, network reconfiguration and fleet renewal. Implementation of the plan started in Dec-2011 and is planned to continue to spring 2013. The overall target is to achieve a profit improvement of LVL70 million (EUR100 million) in 2016 and around LVL330 million (EUR473 million) over five years.

Labour costs are relatively low compared with peers, but labour productivity is weaker

AirBaltic’s labour costs represented 14.1% of revenues in 2012, compared with a weighted average among European airlines of 21.8%. From this we can calculate a total labour cost of LVL32 million (EUR46 million).

With an average headcount of 1,076 (source: airBaltic), we calculate that airBaltic’s employee costs per employee were EUR42,719 in 2012. This is the second lowest employee cost per employee figure among European airlines (higher only than Wizz Air) and compares with a weighted average of almost EUR69,000.

However, capacity figures calculated from airBaltic’s RASK and revenue numbers suggest that its employee productivity, measured in ATK per employee, ranks in the bottom half of European airlines. This approach would also suggest that its overall employee cost productivity, measured by employee cost per ATK, ranks in the middle of the pack. The revenue productivity of its workforce, almost EUR303,000 per employee, ranks it 15 out of 20 European airlines in our analysis.

Labour cost as a percentage of revenue: 2012 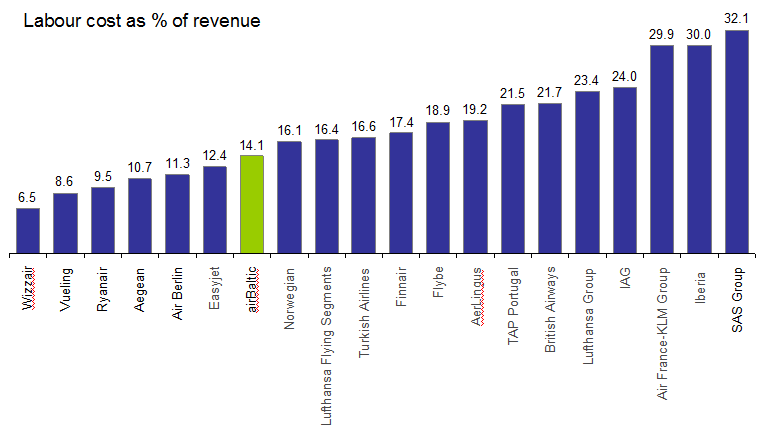 Three phases of development since 2000

airBaltic has gone through three main stages of development since the beginning of the 21st century. From 2000 to 2003, capacity growth (ASK) was modest and revenue growth more or less matched capacity. Over this period, the fleet grew from six to nine aircraft. Next came a period of rapid expansion, with airBaltic growing its capacity almost three times more than the market by 2008.

The latest 2012 figures underline this more cautious third phase of airBaltic’s 21st century development: 2012 capacity was 11% down on 2008, but revenues were up 13%. RASK grew by almost 28% between 2008 and 2012, suggesting that capacity restraint has led to better pricing power. 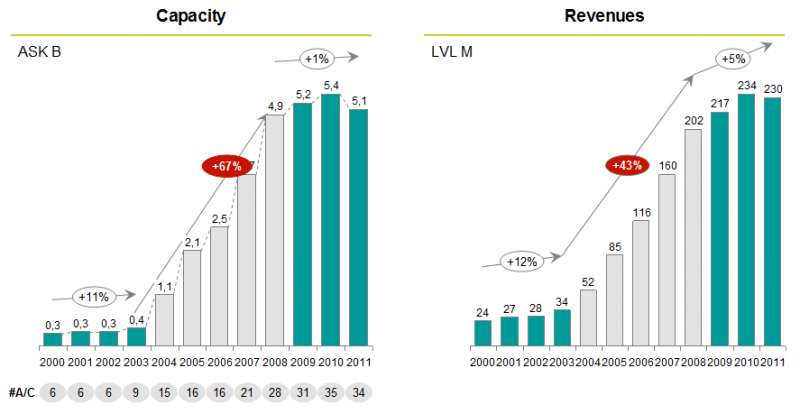 For 2013, airBaltic’s budget sees growth in passenger numbers of 2% and it is currently targeting four million passengers in 2016. This compares with 3.1 million in 2012 and represents average growth of 7% p.a., with transfer passengers being an important growth driver.

According to the CAPA Fleet Database, airBaltic’s 737 fleet has an average age of just over 16 years, while its Fokkers have an average age of almost 24 years. The company has 10 Bombardier CS300s on order as 737 replacements, and a further 10 purchase rights. The 737s are expected to be phased out over the next five years. It has operated Q400NG aircraft since 2010 and has four more on order.

Riga is by some distance its most important base, reflecting a network strategy that has evolved from its previous mainly point-to-point approach. It has a 65% share of seats at Riga, but LCCs Ryanair (second with 15%), Wizz Air and Norwegian Air Shuttle are all present. 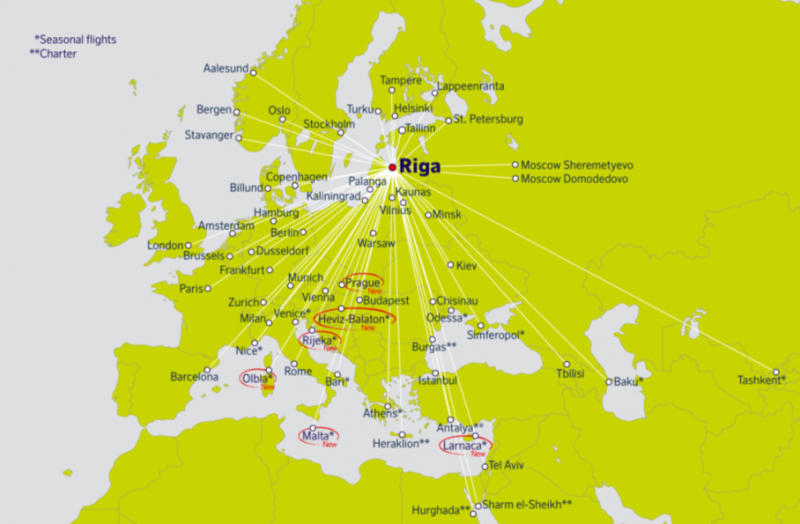 airBaltic’s top 10 routes by seats are dominated by Nordic and Central/Eastern European destinations. Only two, Riga to Paris CDG and Amsterdam, are in Western Europe. The importance of Copenhagen, Oslo and Stockholm reflects airBaltic’s still close links with SAS, which owned 47% of airBaltic until Jan-2009. The carrier is now 99.8% owned by the Latvian state. 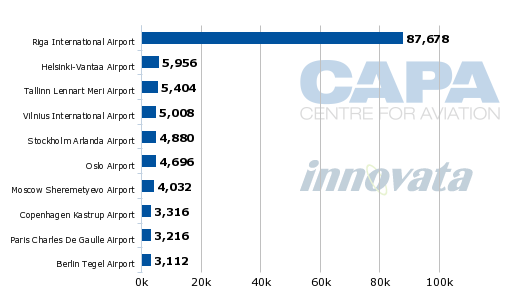 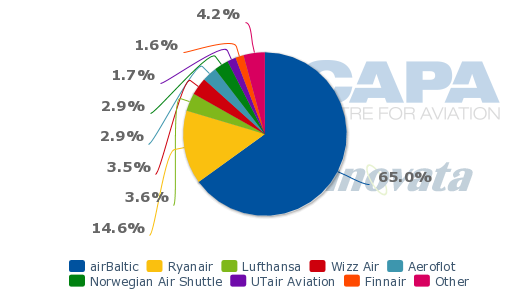 Without published data on average sector length, a meaningful comparison of airBaltic’s unit costs is difficult. For 2012, we calculate its CASK is around EUR8.3 cents and its cost per passenger just under EUR117. Its route network and other published data, from which we can estimate ASKs and seat numbers, suggest an average sector length somewhere around 1,000 to 1,100 kilometres.

If this is so, then airBaltic’s position on the unit cost versus average sector length curve is somewhere between the LCCs and the bigger legacy flag carriers and not inconsistent with the more cost-efficient network carriers such as Aer Lingus.

CASK remains higher than CASK, but gap is narrowing 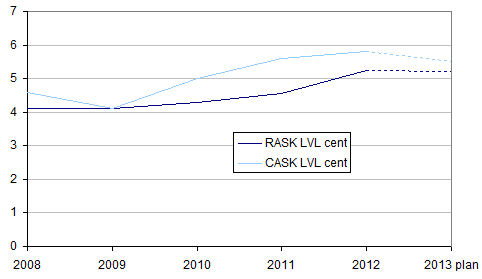 The problem is that airBaltic’s CASK has been growing since 2009 and it remains higher than its RASK (calculated using total revenues). The good news for airBaltic is that CASK growth is slowing and that RASK has also grown since 2009, so that the gap between the two is narrowing. The company’s 2013 plan sees a further narrowing of the gap, based on stable RASK and a fall in CASK. 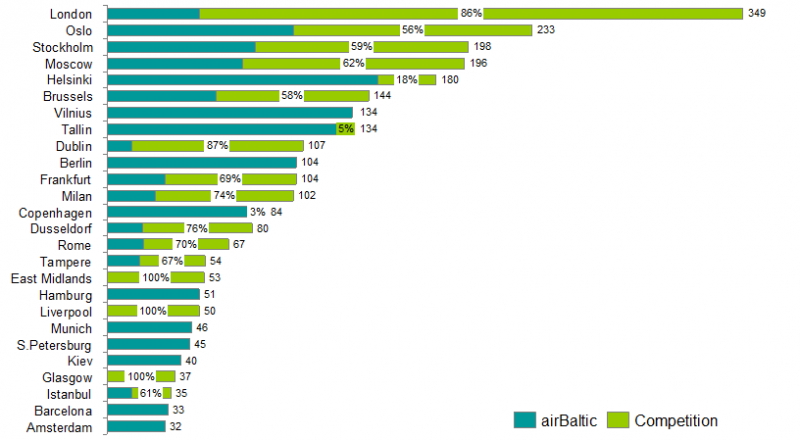 Potential to better its plan on 2013 RASK?

While increasing competition, particularly from LCCS, suggests that airBaltic is right to be cautious in its 2013 plan on RASK growth, its track record of recent years and current strong bookings profile suggest that it may be able to better its plan in 2013 in terms of RASK.

The carrier told CAPA that its summer 2013 bookings are currently double the level seen at this time last year and that it has improved revenue management, adopting a dynamic pricing model. In addition, it is focusing on ancillary revenues, bringing in innovations such as selling a promise of punctuality for EUR24 (at the risk of paying a fare refund if promised punctuality conditions are not met). Furthermore, its position in faster growing markets in Central and Eastern Europe could also help to boost RASK if capacity growth remains modest as planned in 2013.

Provided that it also succeeds in lowering CASK, perhaps it might reach profitability ahead of its 2014 target. 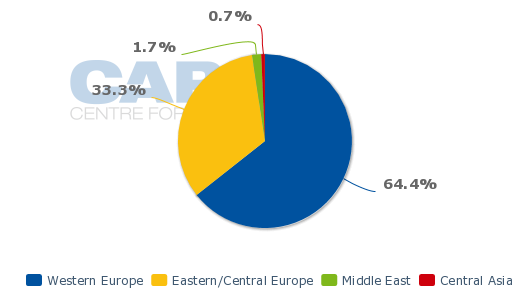