The majority of North and South American carriers’ stocks fell on Friday (14-Aug-09), as US Aug-2009 data, including wholesale inventories, business inventories, retail sales and consumer sentiment, were all worse than expected. As a result, the Dow (-0.8%) fell. The good news however was that oil prices (-4.3%) dropped even further, to USD67.51. Despite this, the Amex Airline Index (-2.7%) was also down.

Only two carriers were up at the end of trading, Expressjet (+11.7%), after reporting Jul-2009 traffic last week, and Republic Airways (+10%). Republic Airways stocks rallied on the back of its winning bid for Frontier Airlines. The carrier plans to operate Frontier as a self-standing wholly-owned subsidiary.

Southwest (-2.2%) stocks slipped, as a result of Republic’s winning bid. According to Frontier CEO, Sean Menke, Southwest removed its USD170 million bid after it was determined the pilot unions for both carriers would not be able to agree on the integration of their ranks.

TAM (-6.6%) stocks suffered the largest fall of the day, after reporting a net profit of USD431 million for 2Q2009, an increase of 123% year-on-year, lower than had been forecast by Itau Corretora and Morgan Stanley. Net revenues meanwhile fell 9% to USD1.2 billion, as costs rose 2.1%, to USD1.3 billion. Despite the result, Banco Santander SA believes the outlook for the carrier is good. The carrier also increased its domestic traffic growth by 10%, compared to a previous forecast of 5%. GOL (-3.6%) stock was also down. 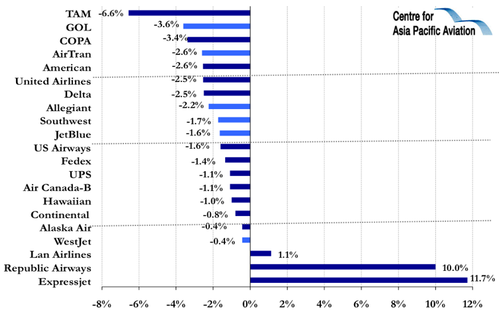