US stocks fell on Thursday (25-Feb-2010) pushing North and South American carriers’ stocks down. The Dow (-0.5%) ended trading lower on news durable goods sales unexpectedly fell in Jan-2010, while jobless claims were up, suggesting the economic recovery is not as strong as some had hoped.

Republic Airways (+3.9%) was the day’s biggest gainer, following news it has ordered 40 CS300s from Bombardier. Republic also took options for up to 40 additional aircraft. The aircraft, configured in a single-cabin, with 138 seats in two-by-three configuration, including 25 'STRETCH' seats, are scheduled for delivery from 2Q2015. The contract is valued at approximately USD3.06 billion at list prices, which could increase to approximately USD6.34 billion if all options are exercised. See related report: Republic still holding centre stage: Blockbuster Bombardier CSeries order

United Airlines slipped (-0.1%) only marginally and Boeing announced (25-Feb-2010) a firm order for 25 787-8 aircraft has been finalised. The order, which includes an option for 50 aircraft, is valued at USD4.2 billion at average list prices. With the delivery of the B787s, United will begin retiring its B747/B767s on international services.

TAM (-2.6%) meanwhile made the biggest fall of the day, over continuous speculation regarding the sale of shares in competitor, LAN (+0.1%). LCC, GOL (-2.4%) was also down. GOL is reportedly considering joining the oneworld alliance. 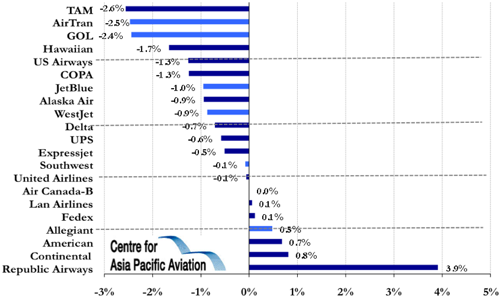