The analysts stated they believe Republic’s “hybrid operating model provides a healthy balance of offensive and defensive characteristics”, allowing the carrier to “benefit from strengthening demand for domestic air travel while remaining relatively insulated from rising fuel prices in its fixed-fee segment”.

United Continental Holdings (+0.5%) made a slight gain for the day after Hudson Securities reiterated its "buy" rating on the merged carrier’s stocks, with a price target of USD35. According to the analysts, United is the only full service carrier in the US planning to cut domestic capacity in 1Q2011. It plans to cut domestic capacity by 1.9% for the quarter, as compared with a collective boost of 2% for other US carriers. Hudson stated this is beneficial to the carrier as its earnings are expected to suffer from the adverse winter weather conditions in 4Q2010. By cutting capacity, United Continental is setting itself up for “decent revenue and profit trends” in 1Q2011.

GOL (-1.0%) was the only carrier to decline for the day, despite signing a commercial agreement to sell, in all its sales channels, tickets of Passaredo Linhas Aereas, a Brazilian domestic airline that recorded growth of 130.89% last year. Passaredo operates 103 services to 20 destinations in Brazil.

As a result of the agreement, GOL will add the cities of Marilia, Ribeirao Preto, Sao Jose de Rio Preto (Sao Paulo), Barreiras, Vitoria da Conquista (Bahia) and Ji-Parana (Rondonia) to its route network. GOL, operating through Passaredo, also offers eight new direct services, including Porto Alegre (Rio Grande do Sul) to Goiania (Goias) and Uberlandia (Minas Gerais) to Rio de Janeiro (Santos Dumont Airport). The routes will be handled by all GOL's sales channels, available for purchase up to the day before the flight. The agreement does not include the accumulation of SMILES mileage on Passaredo flights. 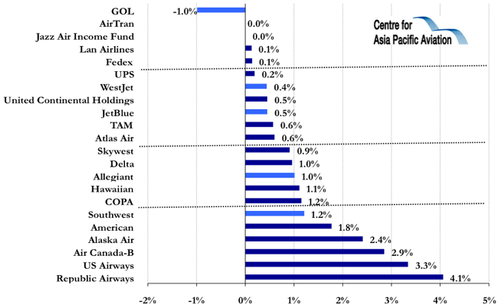