Republic Airways (+2.5%) rose on Tuesday (26-Oct-2010) ahead of reporting its 3Q2010 financial results on 03-Nov-2010. During trading, Dahlman Rose & Co analysts expected the carrier to report earnings per share (EPS) of USD0.68, compared with USD0.09 in the previous corresponding period.

The analysts stated they based the forecast on the carrier’s growth. The estimate is higher than the consensus estimate of USD0.62.

The expansion of LAN’s passenger operations during 3Q2010 were driven by the launch of various regional and long-haul routes. LAN and its affiliates successfully started operating the following routes: Lima-San Francisco, Santiago-Paris via Madrid, Lima-Brasilia and Guayaquil-Galapagos. 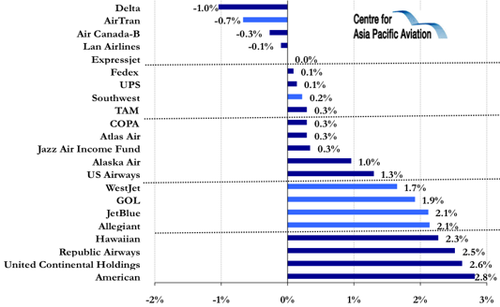