Shares in Republic Airways Holdings jumped 11% on Monday, as the carrier announced that it could cut its ownership in Frontier Airlines from a majority to a minority share by the end of 2014, through a deal with the carrier's pilots. The carrier will make changes to its network, fleet allocation and operating costs to improve overall business results by USD100 million annually.

As part of this, the carrier has reached a tentative agreement with Frontier pilots represented by the Frontier Airlines Pilot Association (FAPA). FAPA agreed, in principle and among other things to the following:

In exchange for the Investment, FAPA will receive an equity stake in Frontier. The company has agreed to certain other conditions which must be met by FAPA, including aircraft growth at Frontier, a liquidity raise of at least USD70 million by the company through one or more debt issuances or other financings, material execution of Frontier’s restructuring program by the end of 2011, and a good faith effort by the company to attract equity investors that would reduce Republics ownership to a minority interest by the end of Dec-2014. In addition, Republic Airways has agreed to establish a profit sharing programme for Frontier employees.

Alaska Air Group announced it has authorised a USD50 million stock repurchase programme. The latest repurchase is part of a long-term stock acquisition programme the carrier has carried out over the last several years.

The company intends to finance the repurchases with cash on hand. The repurchase programme authorises the company to purchase its common stock from time to time through open market purchases, negotiated transactions or other means.

Alaska Air Group has repurchased a total of approximately 7.5 million shares of its common stock for nearly USD212 million through similar programmes over the past four years. 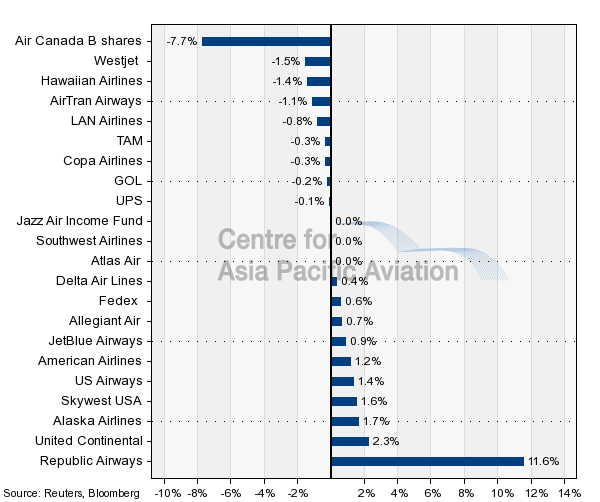