Traffic for Europe’s full service carriers has crossed an important threshold, with total demand (RPKs) moving ahead of capacity (ASKs) for the first time in ten weeks in early July. Long-haul markets to the Asia Pacific and North America continue to improve, with capacity cutbacks now roughly in line with demand. Intra-European markets saw carriers withdrawing capacity much more strongly than the fall in demand.

Traffic improved through June, with the Association of European Airlines (AEA) reporting that the figures were “just slightly less gloomy”, with traffic decreases of approximately 7.5% in the first half of the month and approximately 5.5% in the second half of the month. The industry body stated, “towards the end of the month, there were signs that load factors on European and North Atlantic routes had stabilised, although the Far East market remains very weak”. But AEA added, there is “no relief in sight in the airfreight market”.

For the week ended 05-Jul-2009 (Week 27), AEA reports total member scheduled traffic (RPKs) declined 1.7% year-on-year, a significantly better outcome than the previous week’s 5.5% fall and the best result since Week 17. Overall scheduled traffic continues to climb, with the angle of ascent sharply increasing in Week 27. However, previous sharp recoveries over the course of the past six months have typically been met with equally sharp declines over the following weeks, so hopes of a sustained recovery may be premature. 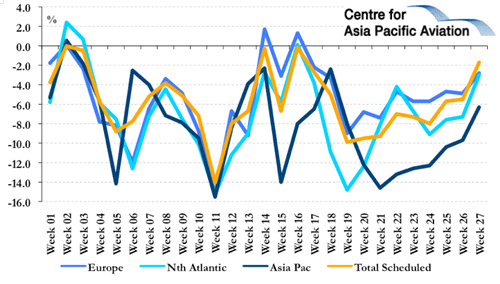 After more than a month of 4-6% falls, cross-border European RPKs also improved markedly, with a fall of just 2.8%.

Capacity cuts continue to slow, but the decline in ASKs is now behind the fall in demand (RPKs) for the first time since April. In Week 27, AEA members dropped total scheduled capacity by 3.1%, compared to 4.7% the previous week. 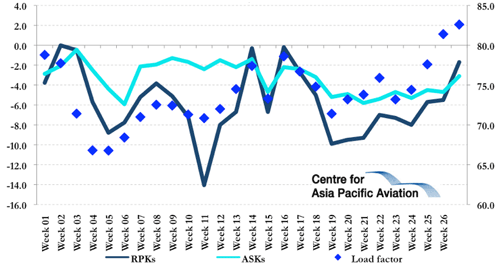 AEA members are now cutting capacity back most sharply on the North Atlantic, in response to very weak yields. Asia Pacific capacity was cut back even further, by 6.7% in Week 27. 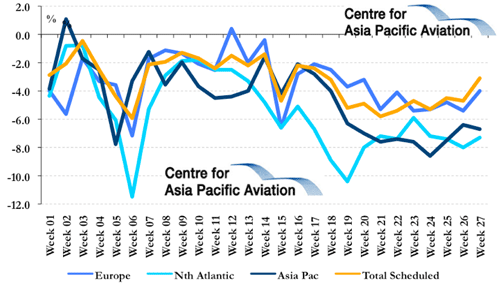 Are load factors hitting the peak?

The remarkable upwards climb in load factors showed some signs of topping out. Load factors on the North Atlantic dropped to 90.3%, after hitting a yearly high of 91.9% the previous week. Asia Pacific load factors were better, up to 84.3%, while cross-border European load factors were 76.4%. AEA member carriers reported an overall average load factor for all scheduled traffic of 82.6% for Week 27. 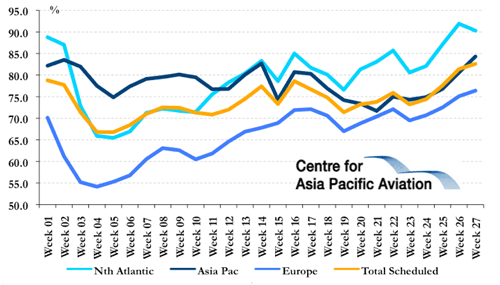 Average load factors in all three traffic regions have improved by more than ten percentage points over the past two and a half months. They should continue to stay firm over the coming peak travel season, but airlines are becoming increasingly nervous about the outlook beyond Summer.

Several AEA members have flagged more capacity cutbacks for the upcoming Winter. This reflects the fact that revenues are still not back to levels that can sustain profitability.