Also reporting traffic yesterday was Canadian LCC, WestJet Airlines. The carrier reported double-digit improvements in traffic in the month (RPMs up 12.1% to 1.3 billion) and its highest-ever April load factor of 84.0% (a 2.8 ppt load factor improvement) while growing capacity (ASMs) by 8.3%. The airline, while not disclosing actual passenger numbers, handled an additional 70,000 passengers in Apr-2010 compared with Apr-2009 levels.   The carrier stated it can attribute this growth to its expansion in southern markets and the ongoing contributions by WestJet Vacations.

In other WestJet news, the carrier signed an interline agreement with Cathay Pacific Airways, to be implemented over the next few weeks, with the carriers cooperating on ticketing and baggage handling. WestJet has been looking to forge links with the Hong Kong-based carrier, which also has an interline agreement with Air Canada, for nearly six years but was waiting to implement the agreement until it upgraded its CRS. The agreement is one of a series of cooperation agreements the Canadian LCC is targeting with foreign carriers.

In other interline news, JetBlue (shares up 1.0%) CEO David Barger, stated the carrier will announce another interline agreement with an international carrier within weeks, which will reportedly be a Star Alliance carrier.

Elswhere, shares in Allegiant gained 1.4%, with Southwest shares up marginally (0.2%). Shares in GOL slipped 0.4% ahead of the release of the carrier’s financial results. 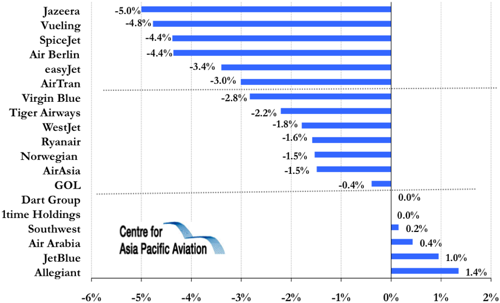