Record global aircraft deliveries in 2017: Boeing ahead of Airbus again, but behind on order backlog

The world's fleet of commercial aircraft grew its numbers by 4% in 2017, to end the year at more than 31,000 for the first time. The number of aircraft on order was more than half of this number, and the order backlog was almost 10 years – the highest at any time in the jet age.

Both of the leading aircraft manufacturers delivered a record number of aircraft in 2017, while Boeing beat its rival Airbus for the sixth successive year. The nine-year winning streak enjoyed by Airbus, which ended in 2011, seems like a long time ago now (although Airbus is closing the gap).

However, although Boeing also received more orders than Airbus in 2017 and had more aircraft in service, the European producer has a larger backlog of outstanding firm orders. Airbus' order book superiority is based on higher numbers of narrowbody orders, whereas Boeing leads on widebody orders.

2017 was another record year for commercial aircraft deliveries

According to the CAPA Fleet Database, the total number of commercial aircraft delivered in 2017 reached another record high.

The database recorded 1,740 deliveries in 2017, which was 1.5% more than the 1,714 aircraft delivered in 2016. This was the seventh consecutive year of rising delivery numbers.

The order backlog is equivalent to almost 10 years of production 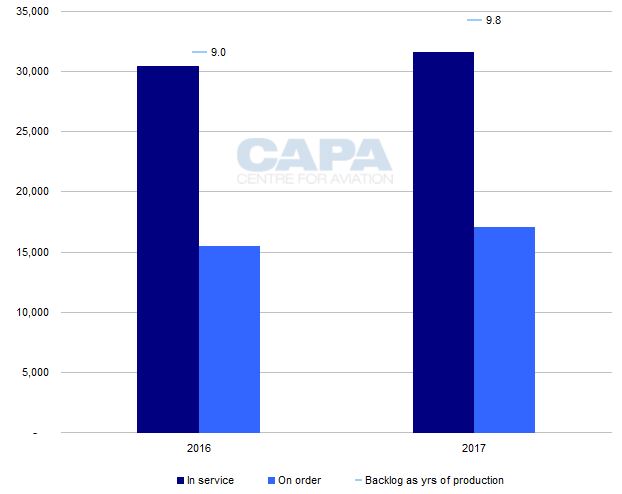 The past year was the first time that both Boeing and Airbus delivered more than 700 aircraft in the same year, but the US manufacturer outsold its European rival for the sixth successive year.

Airbus last delivered more than Boeing in 2011, which had been its ninth year in a row of beating its rival.

Current data in the CAPA Fleet Database indicate that both Airbus and Boeing will enjoy double-digit growth in delivery numbers in 2018, but Boeing will again come out on top.

The database shows 857 deliveries for Boeing and 848 for Airbus this year, giving the US airframer a lead of only 1%.

Typically, the annual delivery numbers projected at the start of the year turn out to be higher than the actual tally of deliveries reported at the end of that year, due to minor production delays (particularly on newer aircraft programmes), rescheduling, and the occasional market exit by airlines. 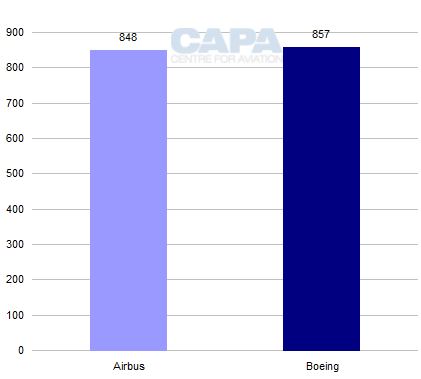 Boeing also comfortably beat Airbus on the number of orders received in 2017, with 912 versus 776. These figures are both significantly lower than at the peak in 2014, when they each achieved more than 1,500 orders.

Nevertheless, both Boeing and Airbus had a record order backlog at the end of 2017. 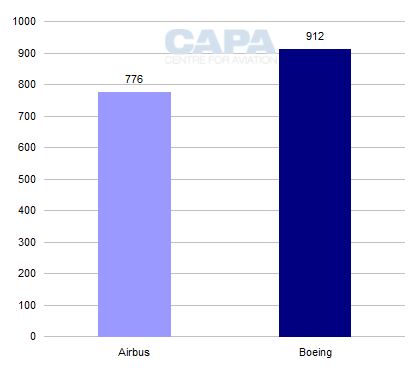 …but Airbus is dominating narrowbody orders

According to the CAPA Fleet Database, Airbus had almost 7,500 outstanding firm orders, giving it a 13% lead over Boeing's order book total of just on the other side of 6,600.

Expressed as the number of years of production, Airbus' order backlog was 10.4 years and Boeing's was 8.7 years at the end of 2017.

In the battle between new-generation narrowbodies, Airbus A320neo family has 5,900 orders, compared with 4,700 for Boeing 737MAX variants.

Airbus and Boeing: aircraft in service and on order at year end 2017 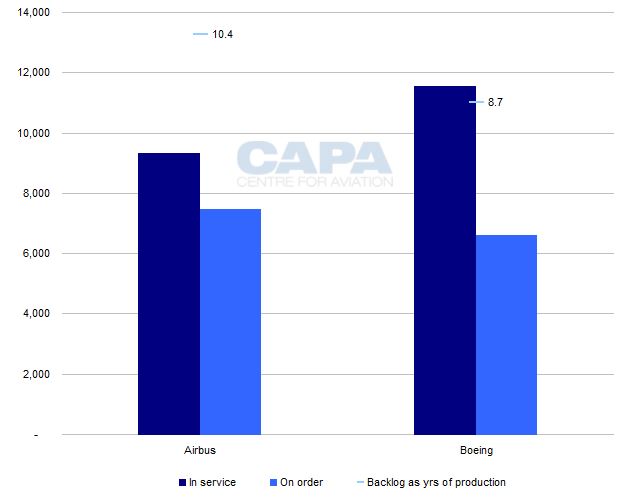 Boeing has more aircraft in service than Airbus

The commercial aerospace sector in good health, but going through structural change in 2018

After seven consecutive years of rising deliveries, the commercial aerospace sector is enjoying the good times, buoyed by strong airline profitability. Perhaps emboldened by this, the sector could effect significant change in 2018.

Airbus has already taken control of Bombardier's CSeries programme, and this is likely to take priority over the A319neo (while the A321neo goes from strength to strength). A tie-up between Boeing and Embraer could lead to further changes in the structure of this end of the market.

In the widebody segment, the A380, which is Airbus' most high profile aircraft programme, faces an uncertain future, Boeing has the upper hand. Airbus is likely to wait for Boeing to launch its new mid-market aircraft before deciding what to do next in the widebody area.

The bull run of delivery growth has endured, but growth in annual deliveries has been slow in each of the past three years. Although airline margins are at record high levels, there are signs that they may not rise further.

At the moment there is no reason to foresee a major downturn in the near term, but maintaining the existing good health of both airlines and manufacturers will be a positive outcome for 2018.