The world’s aviation sector ended 2013 with another record backlog for aircraft orders, as the highest ever number of annual orders added to what was already a record backlog. The number of outstanding orders is equivalent to almost half of the fleet in service. In this report, we examine aggregate orders data from the CAPA Fleet Database to highlight trends regarding the winners and losers by region, business model and aircraft category.

For a low margin industry, the challenge of financing all these orders remains significant. For decades, annual capital expenditure has almost always exceeded operating cash flow generated by the world’s airlines. The industry has had to rely on ever more imaginative forms of external financing, demonstrating that, historically, this is a challenge to which they have risen.

These themes will feature in the CAPA Airline Fleet & Finance Summit, which will take place in Singapore from 25-Mar-2014 to 26-Mar-2014.

The installed base of the world’s commercial aircraft reflects the traditional dominance of the three major aviation regions. According to the CAPA Fleet Database at 18-Feb-2014, North America has 8,544 aircraft, Asia Pacific 6,862 aircraft and Europe 6,744. The next biggest region, Latin America, has 2,078 aircraft. The whole of Africa has only 1,329 aircraft in service and the Middle East 1,247. 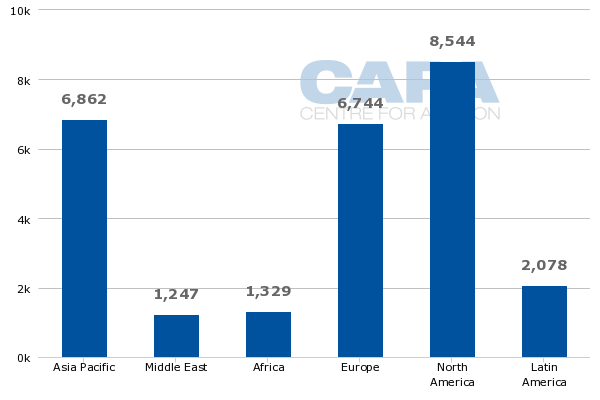 According to the CAPA Fleet Database, there are currently 12,596 outstanding firm orders for commercial aircraft (as at 18-Feb-2014). Of these orders, 3,094 have not yet been assigned to a region, because they are for lessors with an undisclosed operator, for undisclosed customers, or their delivery date is not yet known.

Analysis of the 9,502 orders that have been assigned to a region shows that the three major world aviation regions also dominate the outstanding order book. However, while North America is the leading region for the number in service, Asia Pacific is considerably more important when it comes to the number of orders. Asia Pacific’s 3,338 aircraft on order is greater than both North America’s and Europe’s orders by more than 1,000 aircraft.

Global fleet orders by operator region* as at 18-Feb-2014 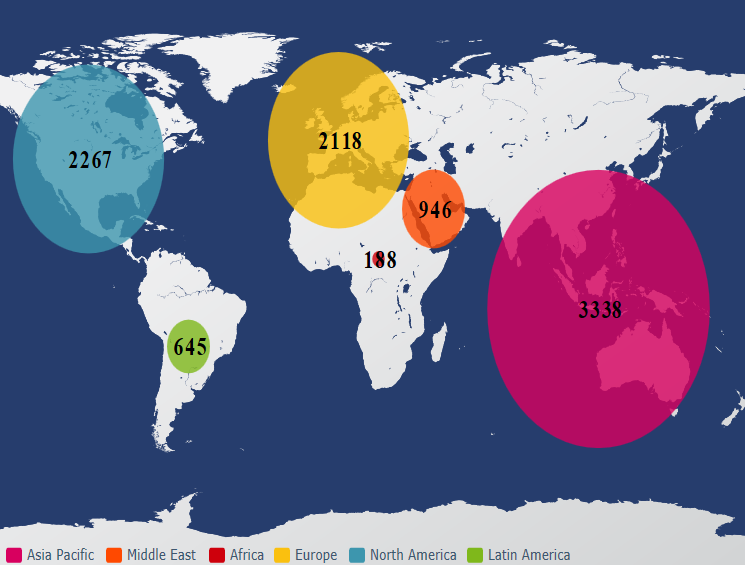 Moreover, the Middle East’s 946 orders, while ranking the region fourth in absolute numbers, place it first when expressed as a percentage of the number of aircraft in service in the region. The Middle East currently has outstanding orders equivalent to more than three quarters of the number of aircraft in service, with Asia Pacific second in this ranking on 49%. On this measure, Latin America jumps ahead of North America, but Africa remains bottom of the list.

While some aircraft will be used to replace existing equipment, this clearly indicates that the Middle East and Asia Pacific will experience the highest fleet growth rates in the coming years (and, by extension, the highest traffic growth) and will achieve this with younger, more efficient aircraft. By contrast, this suggests that North America’s growth is slowing and its fleet is ageing.

*Orders by region include those placed directly by an operator and by lessors assigned to an operator; exclude aircraft ordered by lessors where operator not known, where customer not disclosed, or delivery date not known
Source: CAPA Fleet Database 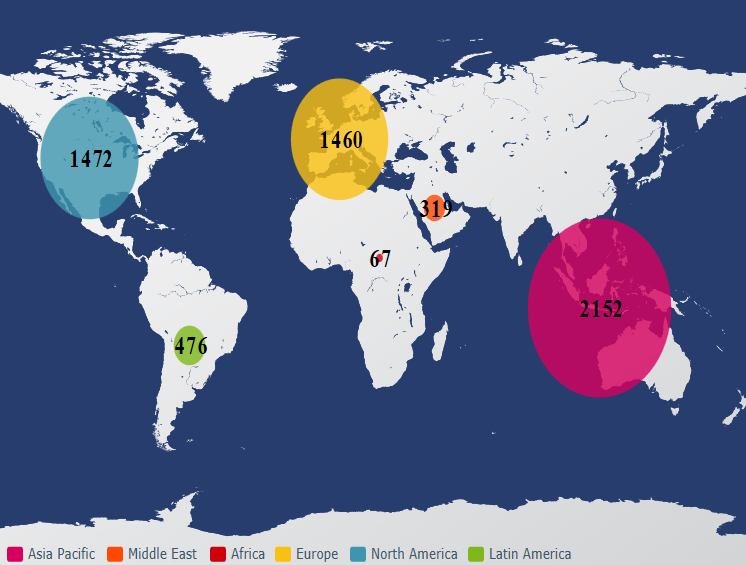 …thanks to Asia Pacific’s LCCs

In fact, the three leading regions’ full service carriers have a broadly similar number of narrowbody orders (roughly 600-700 each). The Asia Pacific region’s 600 additional narrowbody orders overall relative to the other two main regions are almost entirely due to its LCCs, who have ordered more than 1,400 narrowbodies, compared with around 750 to 800 ordered by LCCs in each of Europe and North America.

In each region, LCC orders for narrowbodies are more than FSC orders, pointing the way for further market share gains on short/medium-haul routes by the LCC model (in all its forms). With the penetration of air travel generally lower in Asia Pacific, particularly the emerging market countries of the region, it seems that, to some extent and in some markets, new flyers may be bypassing the traditional legacy model in favour of the more affordable option on short/medium-haul.

However, the significantly higher number of LCC narrowbody orders compared with FSCs in Asia Pacific also reflects the fact that many FSCs have not yet made their next generation narrowbody decision, while their low-cost competitors have already placed major orders. 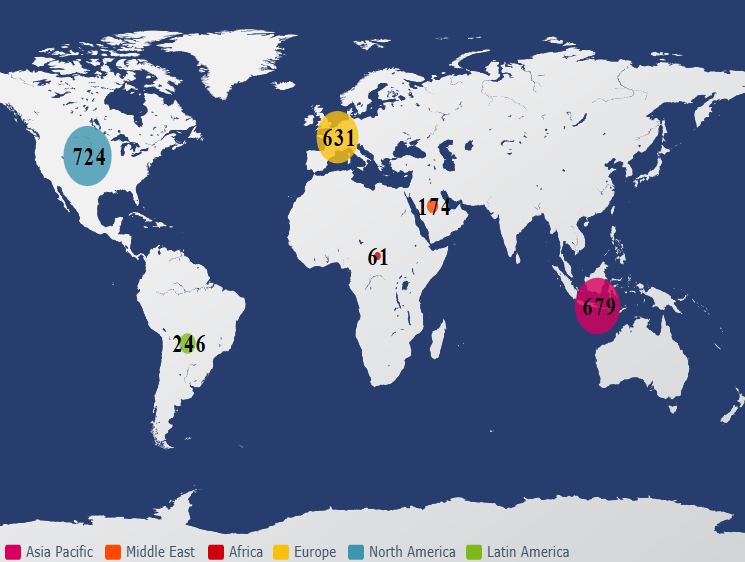 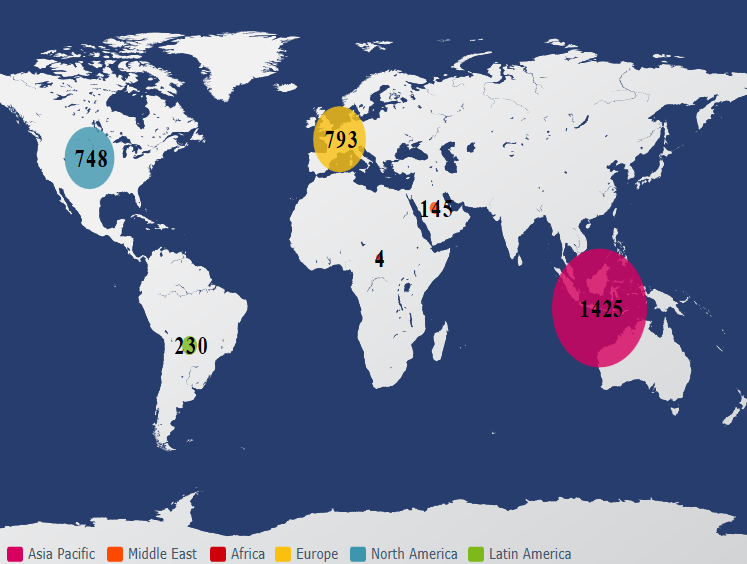 The supremacy of Asia Pacific and the Middle East in widebody orders is stark evidence that the so-called developed economies of North America and Europe, for so long the dominant forces in global aviation, have lost the future of global air traffic (as opposed to regional air traffic) to what they used to call the Orient. 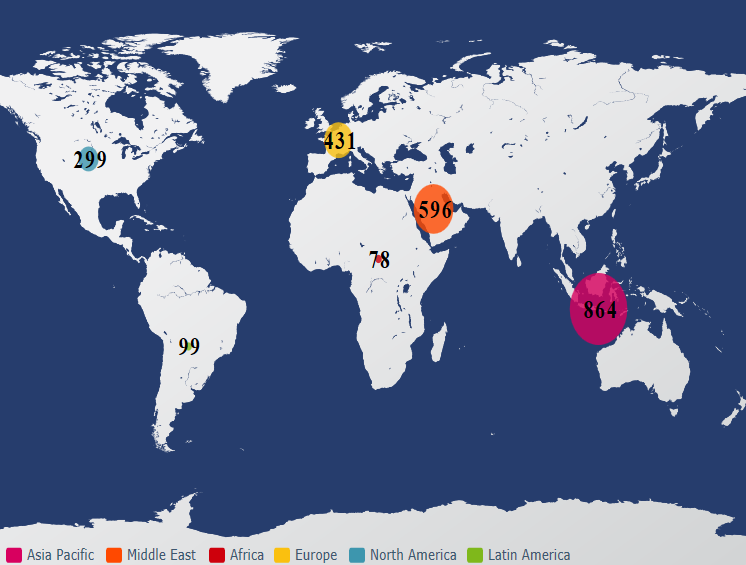 Another difference between East and West is that the FSCs of the Middle East and Asia Pacific have ordered more widebodies than narrowbodies, whereas the reverse is true for the FSCs of Europe and North America. In the latter two regions, the weight of narrowbodies in FSC orders reflects the relatively small geographic area and the liberalised market access of intra-regional operations.

In the vast Asia Pacific region, even intra-regional routes are often long-haul and require appropriate equipment for such routes. For the FSCs of the Middle East, widebody orders are not really about serving their own region, but reflect the strategic ambitions of the Gulf Three to connect all of the rest of the world via long-haul to long-haul transfers.

Placing orders and ensuring that those orders lead to value creation for the airlines that fly them are two different things, as the airline industry has always demonstrated, but long-haul low-cost models look set to be a part of the landscape for some time.

More than half of the world’s aircraft in service, by number of units, are narrowbody jets. This is well known and reflects the weight of intra-regional traffic in world aviation. It is a truism of the jet age that the world has become a smaller place and long-haul flights have made it possible to circumnavigate with relative ease.

But the fact is that long-haul flights are, for most travellers, even frequent travellers, the exception rather than the rule. Widebodies make up less than one fifth of aircraft in service and the balance, a little more than one quarter, is made up of regional and commuter aircraft. 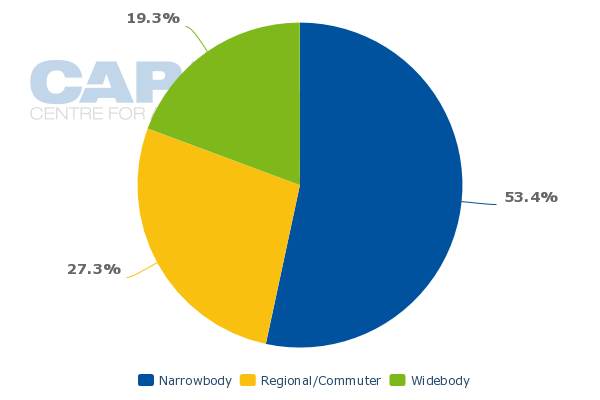 The themes in this report will feature in the CAPA Airline Fleet & Finance Summit, to be held in Singapore 25/26-Mar-2014

A look at the order book suggests that the importance of narrowbodies will increase further. Close to two thirds of global orders are for this work horse category of equipment. Short and medium-haul flights – connecting people within regions, where cultural, historic and economic ties are often closest – are the affordable end of the aviation market for the masses and, as air travel penetration rates grow, it is this end that stands to benefit the most.

Orders for widebodies represent close to one quarter of the total, a higher proportion than their share of aircraft in service.

The squeeze will be felt by regional and commuter aircraft, which are just under a fifth of aircraft in service, but account for less than one eighth of orders. This could reflect a number of factors, but competition from rail and road and the relatively high unit cost (typically) associated with this end of the aircraft range are among them. 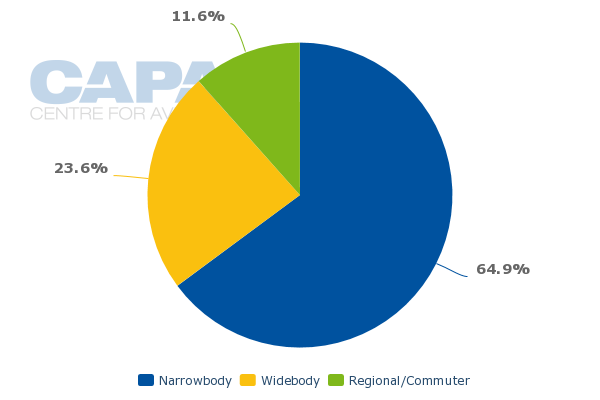 Firm orders include those placed directly by the operator and by lessors assigned to the operator, from 1-Jan-1970 onwards.
Source: CAPA Fleet Database

We can also dissect the fleet by business model. Full service carriers operate more than 60% of the world’s aircraft currently in service, regional/commuter airlines close to 22% and LCCs just below 18%. LCCs have been an enormously successful development, particularly on short/medium-haul, but the FSC model still dominates in terms of the number of aircraft operated. 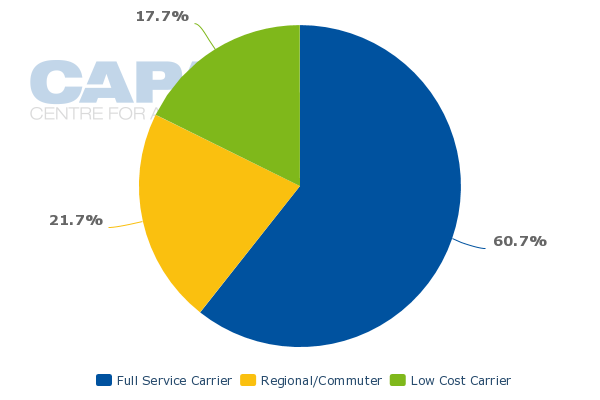 A bleak future for regional airlines?

This suggests that this traffic segment is being absorbed by other types of airlines, mainly FSCs. Regional/commuter airlines are frequently feeders to network carriers and, increasingly, are either disappearing or being taken over by FSCs in a tough competitive environment. 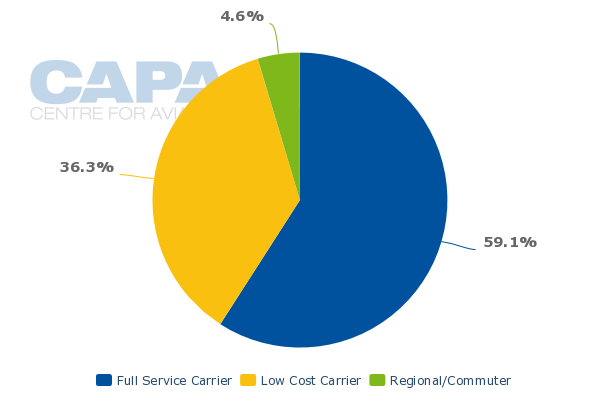 Firm orders include those placed directly by the operator and by lessors assigned to the operator, from 1-Jan-1970 onwards.
Source: CAPA Fleet Database

Analysis of historic deliveries also reveals many of these trends

To a large extent, many of the trends discernable when examining the order book have been clearly visible for some time. Analysis of aircraft delivery figures from the CAPA Fleet Database shows that, whereas North America received the highest number of new aircraft in 2003, Asia Pacific has been the leading region for deliveries since 2006. Since then, North America has been in third place, with Europe remaining the number two region for deliveries.

Digging further into the CAPA Fleet Database also confirms a number of other trends in aircraft deliveries between 2003 and 2013.

The shifting balance of regions, business models and aircraft categories

To summarise the main trends highlighted by this analysis of the CAPA Fleet Database:

External funding is crucial for airlines

While this report has mainly focused on analysing the CAPA Fleet Database to evaluate orders and deliveries, we end with an observation related to financing the record number of aircraft currently on order. This is a topic worthy of significant analysis in its own right. For now, we highlight the challenge of financing deliveries by presenting the chart below, based on data from The Airline Monitor that we have analysed.

The chart plots capital expenditure as a percentage of EBITDA (earnings before interest, tax and depreciation) for the world’s airlines from 1979 to 2013. It shows that there have only been five years in more than three decades when airline capital expenditure has been less than the operating cash flow generated by airlines (using EBITDA as a proxy for operating cash flow, which is an approximation – but a useful one for illustrative purposes).

External funding is crucial to the survival of the industry and this challenge has given rise to a multiplicity of financing approaches. That will have to be the subject of future reports and will be a key theme of the CAPA Airline Fleet and Finance Summit Asia 2014, which will take place in Singapore from 25-Mar-2014 to 26-Mar-2014. 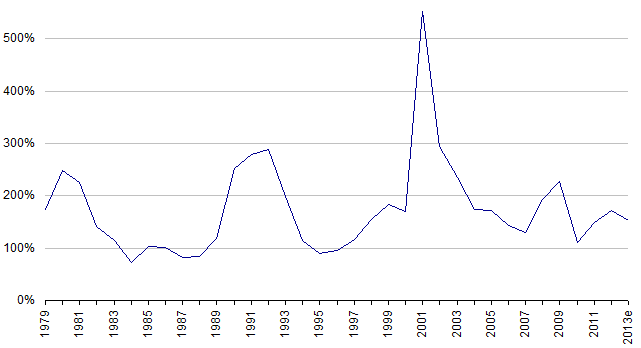 The second annual CAPA Fleet & Finance Summit will held in Singapore, at the Capella, Sentosa Island, from 25/26-Mar-2014

"Pound for pound, this was the best event of 2013. It is the most genuinely airline-centric finance event in the calendar." - John Duffy, COO, Transportation Partners

Plus CFOs/Treasurers/Finance Executives will be attending from:

And more airlines confirming every day!

Click here for more information. Book by next Friday 28 February and save USD300!