Qatar Airways is planning further expansion in Southeast Asia in 2016, driven by the resumption of flights to Cebu and a new nonstop service to Hanoi. Qatar had dropped Cebu in 2012, while Hanoi has been served via Bangkok since it was launched in 2010.

Qatar already has more Southeast Asian destinations than any Gulf airline: 12. It currently has 147 weekly passenger flights to Southeast Asia, having added 25 frequencies in 2015.

In addition to Cebu, Qatar is planning to add at least one more undisclosed destination to its Southeast Asian network in 2016. It has been seeking approval to serve Surabaya, which would be Qatar’s third Indonesian destination, and has also been evaluating Chiang Mai, which would be its third destination in Thailand.

Qatar has more destinations in Southeast Asia than Emirates or Etihad

Emirates is still approximately 40% larger in Southeast Asia based on seat capacity, while Qatar has almost twice as much capacity as Etihad. Qatar is the second largest non-Asian airline after Emirates in Southeast Asia, based on capacity with over 100,000 weekly seats (it is the largest based on size of network).

Qatar has also been growing faster than Emirates and Etihad in Southeast Asia. Qatar’s nonstop capacity to Southeast Asia has increased by approximately 30% over the last year, compared with 10% capacity growth for Emirates and broadly flat capacity for Etihad. 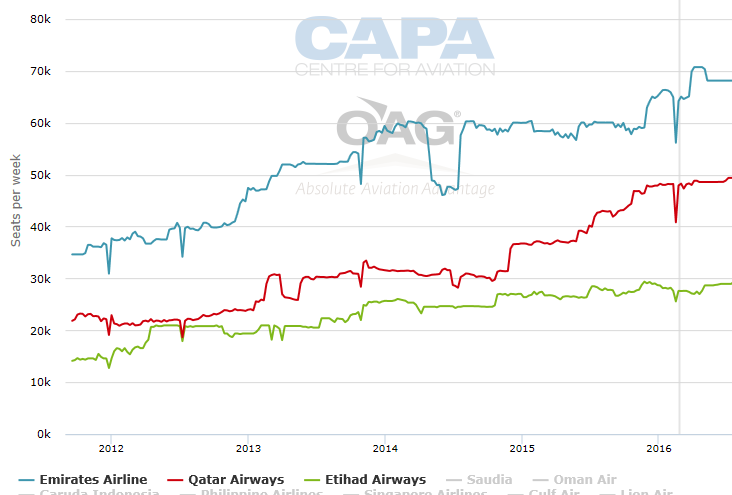 In 2015 Qatar added a second daily flight to each of Bali and Manila, a third daily flight to Singapore and four weekly frequencies to Phuket (for a total of 11). Qatar only launched nonstop service to Bali and Phuket in 2014; previously Bali was served via Singapore, and Phuket via Kuala Lumpur.

Qatar also added capacity to Bangkok in 2015 by upgauging several of its Doha-Bangkok frequencies to the A380. Qatar introduced the A380 on one of its four daily Bangkok flights at the end of 2014 and now deploys the A380 on three of its four daily Bangkok flights. Currently only the Doha-Bangkok-Hanoi flight is operated with comparatively smaller 777s.

Jakarta is currently served with 20 weekly frequencies using a mix of 777-300ERs, 787-8s and A330-200s. Manila and Bali are both served with two daily 777-300ER flights. Yangon, which is served with four weekly A330-200 flights (reducing to three weekly flights during the northern summer season), is the only Southeast Asian destination that Qatar does not serve daily.

Qatar Airways is continuing its rapid expansion in the Southeast Asian market in 2016. Qatar Airways CEO, Akbar Al Baker, told CAPA at the 17-Feb-2016 Singapore Airshow that the airline plans to launch daily service to Cebu by the end of 2016, initially using 787-8s. He said that Qatar also plans to launch nonstop service from Doha to Hanoi, replacing the current one-stop service via Bangkok, and will add at least one more undisclosed new Southeast Asian destination.

Qatar has also already filed an increase for Doha-Kuala Lumpur from Jul-2016, when three weekly frequencies will be added for a total of 24. There will likely be capacity increases in other existing Southeast Asian markets in 2H2016, through additional frequencies or upgauging.

Qatar plans to maintain Phnom Penh as its only tagged destination in Southeast Asia. Cambodia is a growing but relatively small market that is unlikely to support nonstop service to the Middle East at this stage. Qatar is the only non-Asian airline serving Cambodia, and has fifth freedom pick-up rights between Ho Chi Minh and Phnom Penh.

Qatar joins Emirates in expanding in the Philippine market

Emirates plans to serve Cebu and Clark with a daily 777-300ER flight on a Dubai-Cebu-Clark-Dubai circle routing. Mr Akbar said that Qatar plans to maintain its daily Doha-Clark return service as it launches Dubai-Cebu.

As a result, Qatar plans to operate 28 weekly flights to the Philippines by the end of 2016 compared with only 14 in Sep-2015. As CAPA has previously highlighted, Emirates is expanding its Philippine operation from 14 to 25 weekly flights in late Mar-2016, giving it 21,400 weekly seats in the Philippine market.

Top 10 foreign airlines in the Philippines ranked by seat capacity: May-2016

Notes: based on week commencing 2-May-2016
Emirates and Etihad capacity figures are exact; capacity for other airlines is approximate
Source: CAPA – Centre for Aviation & OAG

Qatar launched services to Clark in Oct-2013, when it was required to reduce Manila from two to one daily frequency following the termination of its codeshare partnership with Philippine Airlines. (The codeshare enabled Qatar to operate one Manila flight using Philippine Airlines’ traffic rights.)

Qatar will resume service to Cebu

Qatar dropped Cebu, which also enjoys an open skies regime, in Mar-2012. Qatar initially launched services to Cebu in late 2003 as a tag with Singapore, and prior to its suspension the city was served daily with A330-200s.

Doha-Cebu was unprofitable with the A330-200 because of the relatively low yields in the Cebu market but Qatar is confident that the route can be viable with more efficient new-generation aircraft. Mr Akbar said Doha-Cebu will operate initially with the 787-8 and eventually be transitioned to the A350 as more A350s are delivered. A launch date has not yet been set as it hinges on aircraft delivery schedules, but Qatar expects to commence the new Cebu service in 2016. 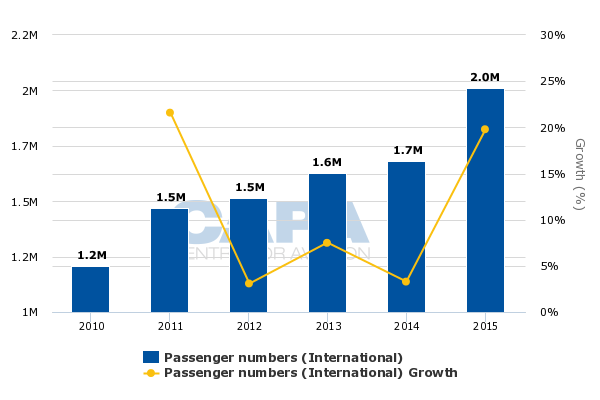 Cebu is also now served by 12 foreign airlines. While there are huge opportunities for growth at Cebu in terms of local and transit traffic, overcapacity could become a concern, particularly in the international market.

Cebu is generally a price sensitive market, with relatively limited premium demand – as Qatar discovered during its initial foray in Cebu. Emirates and Qatar will provide new faster connections to the Middle East and Europe but intensifying competition will impact yields, and it is unclear if there is sufficient demand from the Philippines second largest city to support two Gulf airlines.

Qatar has been serving Hanoi since Nov-2010 and upgraded Bangkok-Hanoi from four weekly frequencies to daily in late 2011. The new nonstop product will enable new one-stop connections from Hanoi to Europe, as well as to Africa and North America. Qatar initially plans to operate Doha-Hanoi nonstop with 787-8s or A350-900s.

Hanoi is a much smaller market than Ho Chi Minh but is relatively underserved and growing rapidly.

Qatar is likely keen to increase its presence in Hanoi before other Gulf or European airlines enter the market. Qatar is also likely keen to leverage its presence in Vietnam, which was the fastest growing market in Southeast Asia in 2015. Qatar became the first Gulf airline to serve Ho Chi Minh in 2007, initially operating a one-stop service via Bangkok.

However, Qatar’s priority is to operate nonstop from Doha. Qatar is evaluating new secondary destinations in Southeast Asia which most likely will be launched as a nonstop.

Surabaya is less likely to be launched in the near to medium term as Indonesian authorities have so far thwarted attempts by Qatar to secure approvals to serve Indonesia’s third largest airport. A weak Indonesian economy also has impacted outbound international demand.

Doha-Chiang Mai would be more feasible as there are no regulatory roadblocks and Airports of Thailand is keen to attract more international services at Chiang Mai. Chiang Mai currently does not have any links outside East Asia while Surabaya has limited service to Saudi Arabia.

However, Chiang Mai may be a less attractive market than Surabaya as it is more seasonal and consists mainly of leisure traffic. Surabaya would be more balanced and consist mainly of labour and business traffic.

Surabaya would also be more attractive – if Qatar can overcome the current regulatory hurdles – as Qatar has limited offline access to Surabaya. For Chiang Mai Qatar can use codeshare partner Bangkok Airways, while for Surabaya it has to rely on relatively weak interlines.

Qatar has no new partnership plans for Southeast Asia

Bangkok Airways supplements Qatar Airways in Yangon and Phnom Penh, providing Qatar's Yangon passengers with an option for the days of week when Qatar does not operate Doha-Yangon, and Qatar's Phnom Penh passengers with an alternative to the Doha-Ho Chi Minh-Phnom Penh service. Bangkok Airways also provides Qatar with offline access to two other destinations in Myanmar (Mandalay and Nay Pyi Taw), one other destination in Cambodia (Siem Reap), and the two main destinations in Laos (Luang Prabang and Vientiane). Qatar is unlikely to operate its own service to Laos – or Brunei, the only other ASEAN country it does not serve on its own – as these are very small markets.

Qatar could benefit from more partnerships in the region, particularly to access the vast Indonesian market. With new feed Qatar could potentially support more capacity on its main Southeast Asian routes – or improve load factors in market such as Singapore, where it has already added capacity.

However, Mr Akbar says Qatar is not planning to pursue any new codeshare partnerships in Southeast Asia. At least for now, Qatar seems content on relying on its own rapidly expanding network. Theoretically, fellow oneworld partner Qantas could be an option for non-premium traffic, via its subsidiary Jetstar; but Emirates' partnership with Qantas and Jetstar Asia perhaps makes that a more complex option. Qatar has a limited very low volume interline arrangement with Jetstar Asia and has so far rejected the possibility of codesharing with Jetstar Asia, which could provide offline access to secondary Southeast Asian destinations.

Qatar’s expansion in Southeast Asia over the last couple of years has been impressive. Qatar is clearly banking on demand for long haul services to and from Southeast Asia continuing to grow rapidly.