Australian shares rose throughout the day to close almost 0.5% higher climbing on the back of strong overseas leads with Westpac’s bumper annual profit extending the gains. Shares in Virgin Blue gained 3.6% yesterday while Qantas shares were up 1.4%.

The Australian Competition and Consumer Commission  (ACCC) has requested Jetstar to provide details of its domestic and Tasman expansion plans for the next three years as it considers whether to allow the alliance between Air New Zealand and Virgin Blue. The airlines have already won over several opponents to the proposed deal, including Wellington Airport and a group of business leaders, by promising to increase capacity and flights on the New Zealand-Australia route.  Separately, the Australian Federal Government has again stepped in to advocate for Virgin Blue 's proposed tie-up with Etihad Airways, with a submission to the ACCC.

Outside of the South Pacific and shares in actively traded Cebu Pacific declined 3.4% yesterday despite the Philippine Stock Exchange index (PSEi) climbing 0.9% for the third consecutive day of gains to reach a fresh all-time high yesterday.

In North Asia and Air China Ltd shares gained 3.8% yesterday. The carrier stated it received approval from the China Securities Regulatory Commission to issue no more than 585 million A shares. 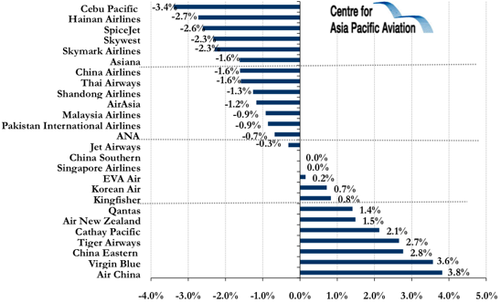