Qantas stated the positive impact of the downward movement in oil prices had been offset by a "deterioration in booking intakes over the past four weeks, particularly in international markets". Qantas noted this was due to lower consumer confidence and the impact of exchange rate movements on demand. Earlier in the week, outgoing CEO Geoff Dixon stated that international travel bookings had "fallen in all classes".

Qantas traffic for Aug-08 - now ancient history - showed further easing in overall demand in a month impacted by industrial action at the airline. The airline's domestic yields fell 1.6% in the month (following a 3% reduction in Jul-08). International yields held up at +6.3% year-on-year, but falling fuel surcharges and weak premium demand could flow through to yields in coming traffic reports. 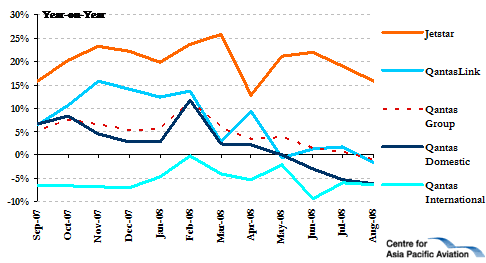 Deutsche Bank has slashed its post-abnormal net profit forecast for Qantas by 16% to AUD481 million, and Virgin Blue's by 44.6% to a loss of AUD51.1 million.

Virgin Blue's load factors slumped 4.3% in Sep-08 as the airline increased capacity by 14.8%. Domestic consumer confidence began to weaken last month and Qantas appears to have clawed back some traffic lost to Virgin as the industrial action ended.