Qantas plans to introduce a higher-density A380 configuration with no First Class seating and remove all First Class cabins from its B747-400 fleet under a AUD400 million inflight revamp of its long-haul fleet, according to a report in the Australian Financial Review. The Qantas board reportedly approved the move late last year.

In one of the clearest signals yet of a trimming in the premium demand outlook, eight of Qantas’ future fleet of 20 A380s will be configured with 12 fewer Business Class seats, making way for an additional 48 seats upstairs, raising total seating in the ‘higher capacity’ Qantas A380s to 500 – an 11% increase from the 450-seat models in operation at the carrier at present. 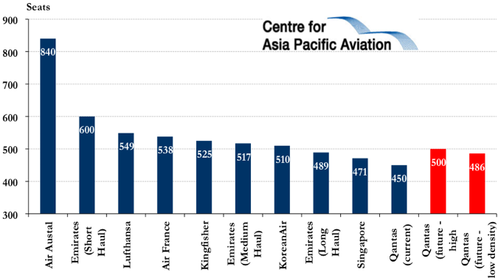 First Class seating could be restricted to routes from Sydney to Los Angeles or London via Singapore in the future, according to the report.

Meanwhile, Qantas is facing the prospect of negotiating collective employment agreements covering almost one third of its 34,000 staff, as current agreements expire in the middle of the year, according to a report in the Sydney Morning Herald. The airline also faces negotiations with its long-haul pilots and licensed aircraft engineers late this year.

Qantas’ shares fell 1.1% in a softer market in Friday and have opened steady in trading in Sydney this morning.

Elsewhere, Virgin Blue fell 0.9% on Friday, while Tiger Airways fell a further 2.7% in Singapore. Air New Zealand rose 4% on the back of its Dec-2009 traffic performance. See related report: Air New Zealand’s yields pick up in Dec-2009, but remain in negative territory

For all today’s other news from the region, including coverage of ANA’s financial results and all the region’s route announcement, please see Asia Pacific Airline Daily. 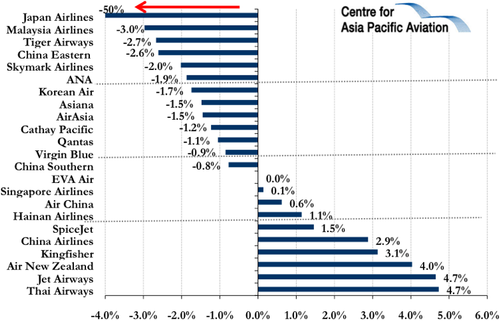