The majority of Asia Pacific share prices slipped yesterday (08-Jul-09), with India’s SpiceJet and Kingfisher leading the pack, falling 6.3% and 5.8%, respectively. Singapore Airlines and Cathay Pacific shares were also down, by 0.5% and 0.4%, respectively.

Qantas also slipped, down 2.4%, following yesterday’s profit and share target price downgrade by RBS. RBS stated it expects Qantas’ FY2009-10 pre tax profit to fall by almost 40% to AUD172 million, due to the devastating combination of a weak pricing and demand environment and generally increasing oil prices, and forecast yield to continue to weaken in FY2010, falling 2.4% domestically and 9% on international services. This prediction of yield weakness was supported by comments by Qantas Chairman, Leigh Clifford, who stated the carrier has suffered a “significant contract in premium travel", which is down by 30% on some routes.

The carrier is considering further capacity cuts, and previously expected a 5% reduction in traffic in the 12 months ended 30-Jun-2010. 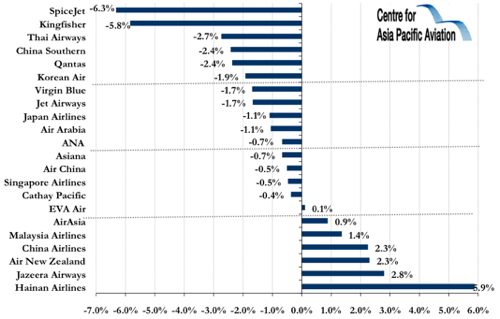