Shares in Qantas are up 1.8% in morning trade today, as the airline announced plans to cancel 15 B787s deliveries and defer 15 more. Investors have welcomed the move, described by Qantas CEO, Alan Joyce, as “appropriate in the current climate”, which will save USD3 billion in capital expenditure.

Qantas will remain the largest airline customer for the B787 with firm orders for 35 B737-9s and 15 B737-8s (a reduction from 65 firm orders), but the decision does raise questions about the Dreamliner's role in Qantas/Jetstar development plans.

Taiwan’s China Airlines shares’ also rose yesterday, by 1.4%. The carrier, which has reported six consecutive quarters of losses, raised TWD5.8 billion (USD176.5 million) through the sale of 602.9 million shares at TWD9.62 (USD0.29)/share, a 22% premium to the share’s closing price on 25-Jun-09, in a private placement to the Taiwan Government-affiliated China Aviation Development Foundation and an unnamed Government fund. 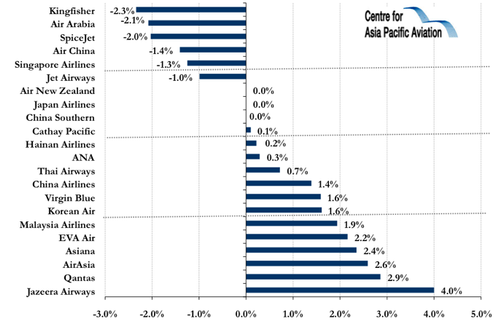