Qantas is the fourth ranked carrier globally in terms of ancillary revenue generation, thanks to its enormously successful frequent flyer programme. According to the Amadeus Guide to Ancillary Revenue by IdeaWorks, Qantas is a leading protagonist in the airline industry’s “ancillary revenue tidal wave”, with carriers worldwide generating a 43% increase in this revenue stream in 2009.

According to the Ancillary Guide, “early results from an analysis of 2009 financial filings made by 96 airlines indicate ancillary revenue increased EUR3.32 billion from 2008 to a total of EUR11 billion (USD13.5 billion) for 2009. These estimates include revenue from a la carte features such as baggage fees and food sold onboard aircraft, commissions from the sale of hotel accommodations, car rentals, and travel insurance at airline websites, and partner revenue generated by frequent flyer programmes”.

The 4th place slot is now held by Qantas at a 25% revenue premium above the same position held by Ryanair in 2008.

Qantas also fourth in terms of per passenger ancillaries

Overall “per passenger” ancillary activity for 2009 surged, with US LCC Allegiant leading the way. UK-based carrier Jet2.com generated an “amazing” 58% increase while Qantas posted a “spectacular” 72% jump, according to the Guide. It also noted, “a major upset occurred with ancillary revenue champ Ryanair falling off the Top 10 list and arch-rival easyJet entering the list at the number 10 slot for 2009.” 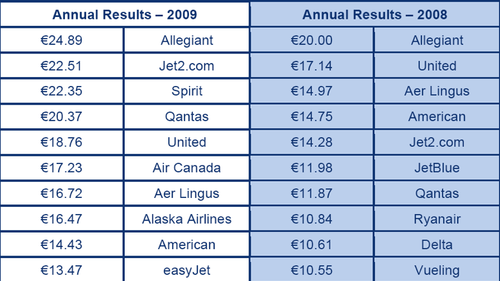 China Southern confirmed plans to launch Guangzhou-Dubai-Lagos (Nigeria) service on 10-Oct-2010. It launched Beijing-Dubai-Lagos service in 2007. At the Farnborough Airshow, China Southern signed an agreement with IAE for the purchase of 20 V2500 engines and long-term after-sales service. 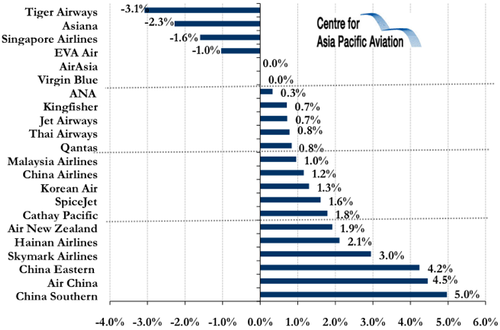