Qantas’ share price defied a week of turbulence in the air and the airwaves, closing the week where it started at AUD2.85 per share, easing 1% on Friday. 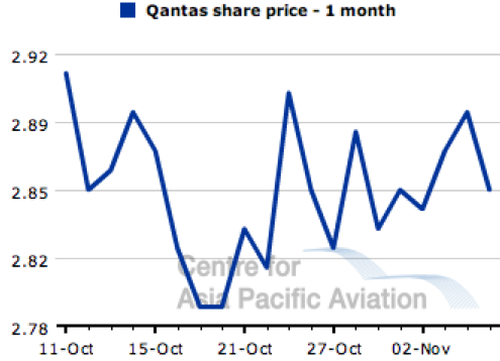 RBS increased its target price on the stock on Friday from AUD3.05 to AUD3.09, reflecting a currency-induced increase in the earnings forecast, but RBS downgraded its recommendation from ‘Buy’ to ‘Hold’. The analysts noted: “We think that FY11 earnings forecasts are achievable, yet challenging, which drives our downgraded recommendation given QAN is currently trading on 11.0x P/E and 1.2x P/NTA.”

RBS added, “There are a number of positive factors benefiting QAN, including favourable currency movements and ongoing improvements in corporate travel. However, QAN faces challenges in the form of competitive pressures in both the domestic market and on its key international routes (US/UK). We therefore believe some of the benefits are being eroded and pose a challenge to QAN in exceeding (high) market earnings expectations.”

Earlier, Deutsche Bank issued an alert following the Qantas A380 engine failure over Indonesia, which considered a scenario of QAN's fleet of six A380 aircraft being grounded for six months. Deutsche estimated it would reduce seat capacity by close to 400,000 over the period and, assuming a high load factor for the A380s of 95%, it would reduce international passenger numbers by around 378,000.

Deutsche added: “If we assume this reduction in international passengers and capacity took place in FY11, our QAN valuation would decrease from $3.20 to $3.04 (-5.1%) and our FY11 EPS would decrease from 24.9cps to 22.1cps (-11.5%) - this assumes an impact in FY11 only with capacity returning in FY12. This analysis does not take into account other factors which may apply, including (i) any compensation that may need to be paid by QAN, (ii) any impact on yields or (iii) the potential for QAN to replace the capacity with alternate aircraft (which may be possible over a 6 month period).”

Deutsche retained its valuation and Price Target for QAN at AUD3.20 and its “Buy’ rating on the stock.

A report in the Sydney Morning Herald today suggests Qantas’ grounding of its A380 could be considerably longer than the 48 hours envisaged, as the airline has reportedly found issues with three more Rolls-Royce jet engines.

Qantas’ bad press has been positive for Virgin Blue. Its shares gained a further 4.6% on Friday to close the week up 9.4%.

Elsewhere on Friday it was a mixed day for airline stocks on the region. Kingfisher and Hainan Airlines advanced 4.6% and 3.9%, respectively, while China Airlines and EVA Air fell by 4.9% and 4.8%, respectively. 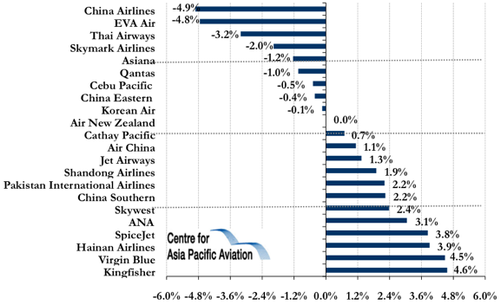 Source: Centre for Asia Pacific Aviation, Reuters & Financial Times
*It was a public holiday in Malaysia and Singapore on 05-Nov-2010.