Qantas yesterday announced a further downward adjustment in planned domestic capacity growth and a corresponding reduction in capital expenditure for the next two years in response to weaker-than-expected demand and high fuel costs.

Perth and Brisbane are key battlegrounds

According to CAPA's analysis of forward schedule data from Innovata, Qantas Group will grow capacity on its top 10 domestic routes by an average of 3.3% between now and the start of the next scheduling season at the end of Oct-2011. Qantas is retrenching capacity on two of the 10 leading routes (Sydney-Melbourne and Melbourne Adelaide), but expanding aggressively on routes to Perth from Sydney (+20.9%) and Melbourne (+9.1%) where it faces rising competition from Virgin Australia. Brisbane is another key battleground and Qantas Group is expanding there from Sydney (+7.0%) and Melbourne (+7.8%).

Qantas' share price has fallen by over 35% since recent highs in Oct-2010. 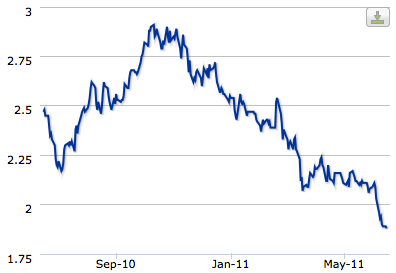