Shares in Qantas declined 1.2% yesterday, coinciding with the release of the carrier’s financial results for the 12 months ended Jun-2010. Qantas reported a net profit of USD100.5 million (-4.5% year-on-year) and total revenues of USD12.4 billion (-4.2%) in the period, while operating costs were reduced by 5.8% to USD12.1 billion.

The carrier stated trading conditions have “steadily improved”, with forward booking indicating “yields in the first half of FY2011 will be higher than the first half FY2010”. Qantas reported domestic business and total international revenue is “expected to improve, while domestic leisure continues to be highly competitive. If present conditions continue, first half underlying PBT for FY2011 may be materially stronger than first half FY2010.”

Following the release of the financials, Goldman Sachs & Partners Australia said there is “no reason to change our positive view” on the carrier, maintaining its “buy” rating.

Meanwhile, Deutsche Bank stated: “We continue to be encouraged by the apparent momentum associated with premium travel recovery.” It added the improved “price and volume momentum makes for a powerful earnings multiplier”. Deutsche Bank, meanwhile, increased its price target to AUD2.90/share reflecting the better performance and improved outlook, and retained its “buy” rating.

RBS Equities also maintained its “buy” rating in Qantas stock and raised its target price from AUD2.99 to AUD3.05, commenting: “We think QAN remains an attractive investment given the earnings leverage it has to an improving operating environment.”

However, RBS warned: “Although our macro view remains positive, risks remain around the ongoing competitive environment in the domestic leisure market. With Tiger increasing its presence over the next 12 months, we expect pressure on yields to remain. However, we do see the presence of Jetstar giving QAN an advantage in combating this threat.”

Meanwhile, the Indonesian Government stated it now plans to launch Garuda Indonesia’s USD400 million IPO at the end of Nov-2010. The government insisted the offering must go ahead as planned despite the carrier’s ongoing delay to settle its debt restructuring with the European agencies. 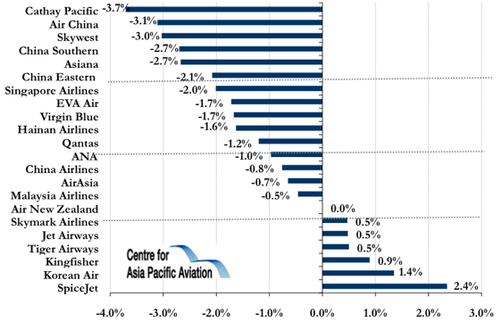