Australia’s Federal Government reported earlier this week that Qantas Airways is losing international market share. In Jul-2009, the share of passengers operated by Australian-designated carriers increased 1.1% to 33%, while Qantas’ market share decreased 3.6 ppts, the largest reduction for any airline, to 20.6%.

In the Indian market, Air India has implemented a similar move to Jet Airways and reduced fares by up to 8%, following its four day pilots strike, which cost the carrier an estimated USD21 million in lost revenue.

Vietnam Airlines expects passenger numbers to more than double in 2009

The carrier expects to carry 2.9 million passengers between Sep-2009 and Dec-2009, a 6% year-on-year, although international passenger traffic is expected to decrease 7% during the four month period.

Singapore Airlines’ and Malaysia Airlines’ shares slipped 1.7% and 1.0%, respectively, yesterday, while Cathay Pacific was up 0.2%. 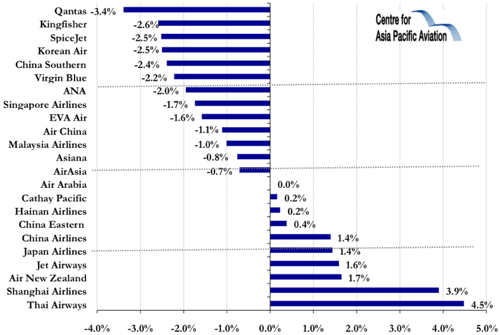