Australian domestic Business Class fares reached their highest levels in 11 months in Feb-2010, according to the Bureau of Infrastructure, Transport & Regional Economics fare survey. The index of real Business Class fares (July 2003 = 100) rose to 104.0 in Feb-2010 to the highest level since Mar-2009 (104.7), reflecting increasing in economic activity and recovering corporate travel.

Business fares are essentially flat year-on-year. A moving 13-month average suggests a floor was reached around Sep-2009, with average Business fares moving up since then, in a welcome sign for airlines highly leveraged to corporate travel, namely Qantas, and, to a lesser extent, Virgin Blue. 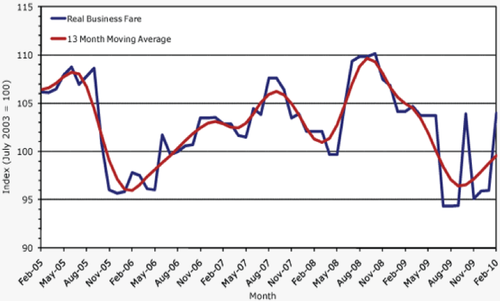 Additionally, Mr Joyce told Bloomberg television, “in the domestic market, in particular, we saw airfares increase before Christmas and we were hoping that would occur also in the international markets”, adding, “some of the international markets are still very weak, but we expect them to follow the domestic return to strength that we saw before Christmas." He said Qantas may raise fares this year after increasing ticket prices as much as 5% in Dec-2009.

Last Friday, Virgin Blue confirmed its pre-tax profit forecast of AUD80-110 million for the full year to 30-Jun-2010, compared with a loss of AUD93 million a year earlier. The airline's previous guidance was for a ''return to profitability'' this financial year.

But there is no sign of recovery in restricted and full economy fares, while best discount fares are well down on the same time last year. These fares account for the vast majority of travel within Australia. 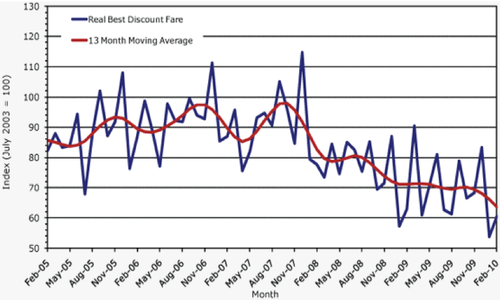 Tiger Airways indicated its recent IPO in Singapore would help it ‘‘embark on the next stage of growth’’, with increased frequencies and new destinations planned from its existing bases in Singapore and Australia. Tiger last month brought forward the delivery of five A320 aircraft to late 2010 and early 2011, instead of 2016, to further expand in Asia and Australia. Tiger plans to increase its group fleet from the current 17 A320s to 68 by Dec-2015.

Jetstar is also back into growth mode domestically, while Qantas mainline and Virgin Blue continue to pare back domestic capacity.

International passenger yields “may well have turned the corner” – IATA

International premium demand strengthened since late 2009, according to IATA, with a recent survey showing airlines are becoming more optimistic about the outlook for yields. Over three-quarters of respondents indicated that international passenger yields should increase over the coming year. See related report: Airlines see improved yields ahead, but risks remain – IATA survey

But IATA warned, “the risk remains of excess capacity re-entering the market once more and muting yield recovery”. That is true of the Australian domestic and international markets, where the spectre of overly aggressive capacity expansion remains, as the airlines begin to restore aircraft utilisation to previous levels and as new orders are delivered.