Passenger numbers increased 8.8% to 4.0 million with load factors averaging 82.5%, a 0.8 ppt decline. Shares in the carrier closed down 1.1% yesterday ahead of the release of the traffic data today with the carrier’s shares weaker in morning trading today.

Shares in Skymark Airlines strengthened 6.6% on 30-Nov-2010. During the month, the Japanese LCC announced plans to shake-up the Japanese market with plans to introduce A380 equipment. Its A380s will feature a record-low 394-seats, comprising only business and premium economy classes, and will fly to London.

The carrier is in talks with local and foreign creditors to remove debt covenants, which will allow Thailand’s Ministry of Finance to reduce its stake in the carrier from 51% to 49.9%. State Enterprise Policy Office Director General Somchai Sujjapongse stated the ministry is “ready to consider that”, as the carrier “will be more flexible and better able to compete with the private sector” if it is not a state enterprise. 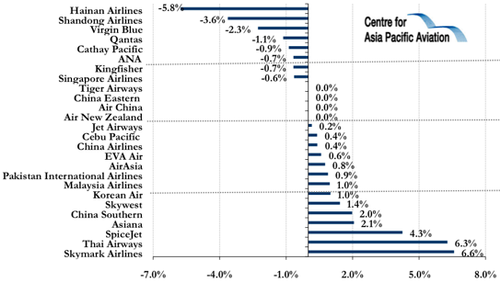