Qantas’ shares were down over 7% in early morning trading, upon the release of the carrier’s financial results for the six months ended Dec-2009, containing a cautious assessment of the full-year outlook.

The carrier warned of difficult times ahead, with continued yield weakness (after a 14.9% yield reduction in the six month period), stating that while international yields are improving, they are expected to “continue to lag behind the recover of the domestic market in the short to medium term”. The airline expects underlying PBT for the full year ending 30-Jun-2010 to be in the range of AUD300-400 million (USD269-359 million). See full report: Qantas clawing its way back, but big challenges remain. Cautious outlook, shares plunge

Shares in Virgin Blue soared 6.7% yesterday, but have fallen 3.9% in morning trade today, as the Australian share market delivered its largest daily gain in two and a half months yesterday (of 2.2%), as improved economic data out of the US and easing concerns regarding the debt crisis in Greece boosted investor confidence on stock markets around the world.

Also gaining yesterday was Singapore Airlines (up 3.2%), as the carrier, upon the release of its Jan-2010 traffic highlights, stated overall passenger demand continues to “recover in tandem with the improving global economy”.

The carrier reported a 3.3% reduction in passenger numbers to 1.4 million, reflecting a 7.8% systemwide capacity (ASKs) reduction. Load factors increased 5.2 ppts to 79.1%, with load factor improvements across all regions. 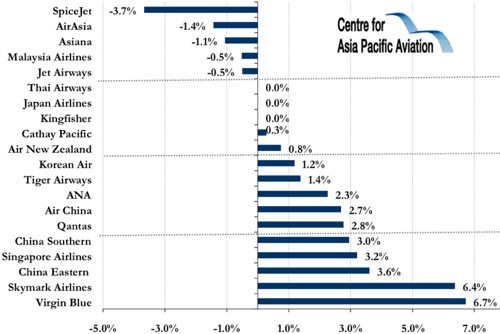