Qantas stated it expects to return to profitability in the current reporting period (six months ending 31-Dec-2009), with a profit before tax in the AUD50-150 million (USD44-133 million) range, due to "improving” passenger volumes and yields. The carrier reported a profit before tax of AUD288 million in 1HFY2009 (six months to Dec-2008), which was in turn down 68.2% on the result in the six months to Dec-2007.

Qantas posted its first half-year net loss in six years (and only the second half year period of unprofitability since 1995) of AUD93 million in the six months to Jun-2009), dragging down the carrier’s full year net profit by 88% to AUD117 million and annual pre-tax profit by 87% to AUD181 million. The main driver of the carrier’s profitability slump was plummeting Business demand and significant discounting by rival airlines.

Yields on the improve

Qantas reported improved yields in Nov-2009, with domestic yields down by only 3.7% in Nov-2009, for the smallest contraction in ten months. International yields fell by 19.2%, for the smallest reduction since Apr-2009. The yield reductions also reflect structural changes in the group's flying operations involving the shift in capacity share from Qantas mainline operations to Jetstar’s lower cost (and lower yielding) operations over the past 12 months. 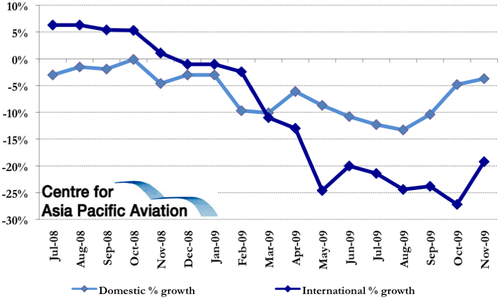 The yield improvements are expected to continue, with the carrier increasing fares on select international routes on 18-Dec-2009 - its first fare increase since Jun-2008. First and Business fares are being increased by 3% on popular routes, including services to Britain, Europe, Hong Kong and Singapore, while Premium Economy and Economy fares will rise by 5% on a larger number of routes, including services to North America.

The carrier, earlier in the month, had already increased domestic fares by 5-10%, covering 14 key routes, for the largest increase for the Group since the start of the global financial downturn in 2008.

CFO, Colin Storrie, stated the carrier expects domestic demand to recover faster than international demand, although Qantas is now starting to see an improvement in forward bookings for international operations. 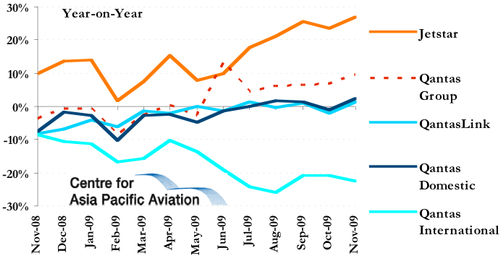 Importance of Jetstar shining through 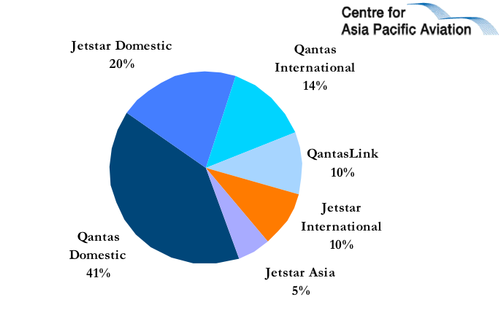 As a result of the improving demand, Qantas announced plans to begin increasing capacity across its domestic network from 29-Mar-2010, with the move to add more than 340,000 seats over the following 12 months, as its “restores capacity removed in response to the economic downturn”.

The changes will see the addition of 19 services, while capacity will be restored on other sectors, through an upgrade from B737 to B767 equipment.

CEO, Alan Joyce, commented that the airline is “seeing some improvements" in domestic demand, "so the time is right to begin restoring capacity to ensure we are well place to meet that demand”.

The capacity increase following Jetstar’s recent announcement (on 10-Dec-2009) that it plans to significantly grow its domestic Australian operations between Mar-2010 and Jul-2010 by introducing an additional 700,000 new seats p/a to select destinations, as it takes delivery of four new A320 aircraft.

The LCC plans to introduce 77 new weekly services, predominantly from its Melbourne and Sydney hubs to key leisure destinations, including the Gold Coast, Sunshine Coast, Cairns, Newcastle and Tasmania. CEO, Bruce Buchanan, stated the increased capacity would increase its market share by approximately 18% and passenger numbers by 7% year-on-year.