Qantas-British Airways merger has the ingredients for success

Qantas has confirmed media speculation it is negotiating a merger with its long-time partner, British Airways (BA). Though talks are at an early stage, Qantas has revealed a potential structure centres on a company dual-listed in London and Sydney, with two boards and separate brands, but one set of directors and a single balance sheet.

BA was a cornerstone 25% investor in the 1995 float of Qantas (adding significant value to the Australian airline's subsequent IPO), but BA sold its (reduced) stake in Qantas in Sep-04. More than a decade on, Qantas appears to be returning the favour, with BA shares leaping 12.5% yesterday on the news (its biggest daily increase since 2002), while Qantas shares have added approximately 5% in Sydney today (midday).

The potential Qantas deal adds to BA's complex web of other merger negotiations involving Iberia and American Airlines. Any or all of these deals are massive undertakings and are a direct response to the toxic environment airlines face with rising costs and falling revenues, but also the unprecedented opportunity to create a global carrier as ownership and control and access restrictions ease around the world. In this regard, BA is also moving to counter the threat posed by the expanding influence of the acquisitive Lufthansa and Air France-KLM groups.

BA and Qantas also have to contend with fast-growing entrants, likes of Emirates, which has catapulted into fifth place on the list of the world's largest international airlines (by RPKs, as at 2007). British Airways is actually 2% smaller than it was in 1997, while Qantas has left the Global Top 10 altogether. 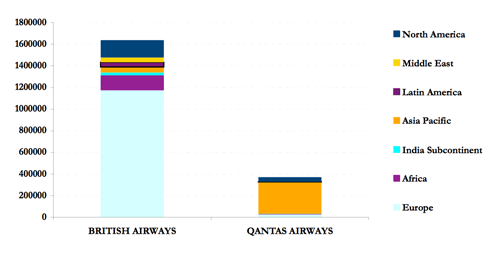 BA has roughly twice as many jet aircraft in its fleet than Qantas (though a much larger proportion of narrowbodies). Qantas however has considerably more aircraft on order than BA (106 vs 60), and much more attractive early positions in the crucial B787 and A380 production lines.

Both carriers are well into multi-year restructuring and cost cutting programmes. The next step up in cost savings could come from a merger, targeting further cost savings through joint operations, crewing and ground services. Most of the duplication of resources has been removed thanks to the BA-QF Joint Services Agreement, but there are some key revenue synergies through greater network linkages and feeds in their respective markets (European, trans-Atlantic and Asia Pacific) that could be secured.

Qantas enjoys some excellent early positions on both the A380 and B787 production lines. A single BA-QF balance sheet could signal joint fleet operations more broadly across their networks. In an uncertain environment, particularly on the international front, added flexibility in the deployment of aircraft would be much sought after by both carriers.

The two airlines have effectively been operating as one for the past decade on the Kangaroo route, so changes for the regional market from a merger will not be noticeable. The JSA has been subject to ACCC approval and is up for renewal mid next year. Australia's foreign airline ownership restrictions could be eased to up to 49% over the next 12 months (as the government's Aviation White Paper policy statement is finalised).

The BA-QF merger would bring together two premium-focused airlines, while Qantas also brings Jetstar to the table. The successful LCC is an interesting equation and is likely to be a vehicle that is used increasingly in servicing routes from Australia to Europe. There could potentially be a future role for Jetstar within Europe, but it is questionable whether the EU will permit a Jetstar model to operate as a European carrier, if it is not 51% owned by European nationals. But Australia is negotiating with the EU on a comprehensive aviation agreement. BA and Qantas will no doubt be lobbying for a precedent on the ownership question to be created.

Crucial to the success of any deal will be the personal relationship between the respective airline CEOs. In the case of the Qantas-BA deal, the Irish connection between British Airways CEO Willie Walsh (a former Aer Lingus CEO) and new Qantas CEO Alan Joyce (who also spent eight years at Aer Lingus) is highly important. In light of the BA merger talks, the Qantas board's appointment of Mr Joyce takes on fresh significance. The personal affinity between the leaders could be the 'X factor' in a deal that will likely face considerable hurdles.